The liberal party lent its full support to Park Won-soon, an independent candidate backed by civil groups, in order to take Seoul from the control of the conservative GNP. 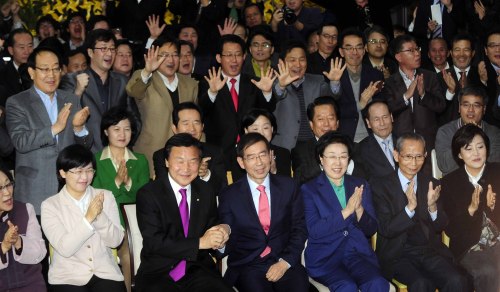 But the decision to root for a civil activist, not one of its politicians, may backfire for the party, as Park and his key ally Ahn Cheol-soo are likely to gain more influence in the parliamentary and presidential elections next year, the observers said.

“I represent the public’s desire for a new politics,” Park has been saying ever since he announced his run for Seoul mayor.

Political analysts have also said that the popularity of Park and Ahn, a famed venture entrepreneur and professor, reflect the deepening voter disillusionment with established politics.

The two, although they have no political affiliation, are supported by young and reform-minded voters, the traditional vote base of the DP. 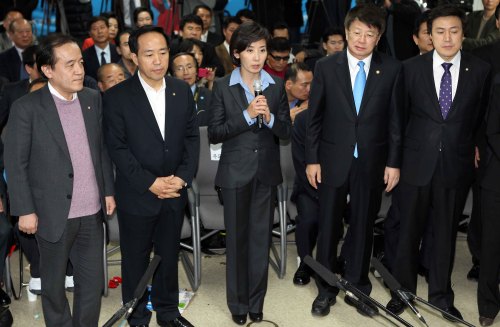 Ruling Grand National Party candidate for Seoul mayor Na Kyung-won thanks her supporters at her campaign office in Seoul on Wednesday. (Yonhap News)

Park declined to join the DP to compete for its mayoral ticket.

“The victory of Park is the victory of DP,” party chairman Sohn Hak-kyu said on Tuesday, the last day of campaigning.

But the rising political clout of non-party figures means Sohn, a presidential aspirant, and other DP members will struggle to take the center position as liberals look to choose a candidate.

The GNP will have much soul-searching to do following the by-elections.

Mindful of the election’s fallout, GNP chairman Rep. Hong Joon-pyo tried to play down the widespread notion that the Seoul mayoral election was a proxy war between liberal and conservative presidential candidates.

Still, Hong and other GNP leaders will find it hard to escape their responsibility for the loss, said Shin Yul, politics professor at Myongji University.

“If opposition wins, the GNP will have some difficult times, with members questioning whom to blame,” he said before results came out Wednesday. Some could put the blame on President Lee Myung-bak, who came under criticism for his plan for a luxury retirement house, he added.

The defeat of Na Kyung-won, the GNP’s candidate for Seoul mayor is a major blow to Park Geun-hye, the GNP’s most prominent presidential candidate who abandoned her low-key persona to campaign for Na.

“A mayor will not be able to run Seoul responsibly, if they do not have a strong political party behind them,” Park Geun-hye said Tuesday.

Na’s defeat to an independent candidate is a clear rebuttal of her remark by Seoul voters.

The election was widely considered a proxy war between Park Geun-hye and her potential presidential competitors on the opposition side ― Ahn, Sohn and Moon.

Voters will elect new members of the National Assembly and the next president in April and December, respectively, next year.

For the ruling party, by-elections are a tough nut to crack as many voters have used them to deliver their dissatisfaction with the performance of the incumbent administration.

In three of the four by-elections conducted since the Lee Myung-bak administration took office in February 2008, the GNP suffered defeats to the DP.

In the by-election on April 29, 2009, the GNP failed to secure even one out of the five parliamentary seats up for grabs.

In another held on Oct. 28, 2009, the GNP was virtually defeated as it failed to gain any seats in strategically crucial districts in the Seoul metropolitan area and the Chungcheong region.

In the by-election on July 28, 2010, the ruling party saved face as it won in five out of the eight parliamentary seats at stake. But it suffered another setback in an April 27 by-election this year as it lost in two of the three key districts including one in Bundang, Gyeonggi Province, which had long been regarded as one of its strongholds.