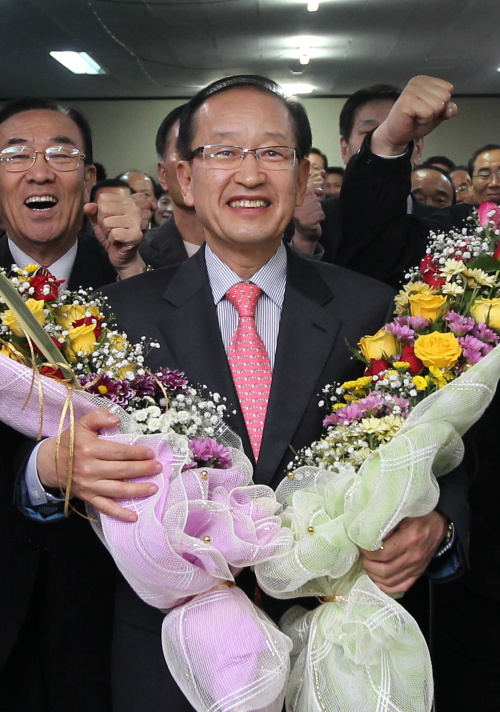 Jung Young-seok of the ruling Grand National Party smiles at his office in Busan after winning a by-election in Dong-gu, Busan, Wednesday. (Yonhap News)

Featuring an unprecedented contest between a ruling party standard-bearer and a civil society leader, the by-election drew keen attention as its outcome was expected to be a crucial gauge of public sentiment ahead of the general and presidential elections next year.

“All voters including myself want a fresh change and new politics, in which the mayor steers clear of any political disputes and prioritizes the welfare of the citizens,” said Shin Jung-sik, a 54-year-old businessman.

Like Shin, many voters wanted the new mayor to “genuinely serve citizens” rather than thinking of the top post as a stepping stone on the way up the political pecking order.

“The mayor Seoul citizens need now is someone who does not engage in ideological, political fights at the expense of the citizens. The mayor should truly work for the citizens and think ahead about what they are really in need of,” said Baek Nam-young, a 59-year-old businessman.

What was notable in the election was that leading civic activist Park Won-soon gained wide public support. Experts said that his popularity stemmed largely from public disenchantment with political parties and their relentless conflicts.

“Voters are disillusioned with the existing political parties. Politicians have lost public trust while burying themselves in political disputes between the ruling and opposition parties and even factional infighting within their own parties,” Choi Han-soo, political science professor at Konkuk University, told The Korea Herald.

“Voters are frustrated as they have failed to uphold their public promises and pursued their self-interest. When the civil society leaders emerged, they thought they were new alternatives to the established politicians under these circumstances.”

At the polling booths, there were also young voters who were thrilled that they were able to exercise their democratic right for the first time.

“I really looked forward to casting a ballot in a major election. This is a duty as a grown-up citizen and now, I can enjoy that. It is a good experience for me,” said 19-year-old Lee Hyun-sung who hurried to the polling station to avoid being late for his morning class.

“I don’t still fully understand the political issues probably because I am a young voter, but I hope the new mayor can pay more attention to welfare issues for students such as tuition fees so that Seoul can put itself on par with other educationally advanced cities in the world.”

The number of the eligible voters for the Seoul by-election is around 8.37 million, about 81 percent of the total population tallied at some 10.3 million, according to Seoul’s election watchdog.

Many voters came to the polling stations, anticipating that their votes could impact the way they live in the city.

“Exercising your political right by casting ballots is very crucial as it will all come back to your life here and influence the management of the city,” Ahn Yun-suk, a 48-year-old office worker, said.