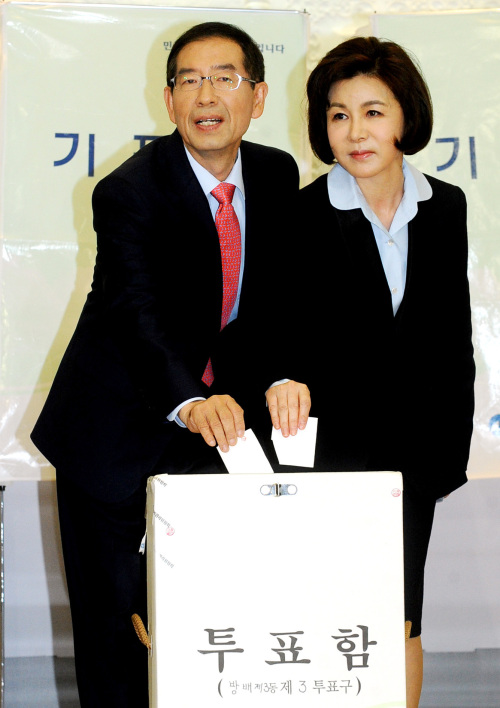 
The by-elections on Wednesday cleared the runways for presidential aspirants to make their sorties for the big race next year, pushing President Lee Myung-bak deeper into his lame duck status.

The bustle for the 2012 election within the ruling party, which began to turn a cold shoulder to Lee early this year by boycotting his top state auditor nominee, is to overshadow Cheong Wa Dae at a much greater pace.

The Seoul mayoral by-election provided an opportunity for presidential hopefuls to begin a warm-up for their own campaigns.

The ruling Grand National Party’s factional leader and former chairwoman Park Geun-hye drifted from her usual low-key mien to campaign for her party’s mayoral candidate, preserving her reputation as “the queen of elections.” Park, who is supported by a third of the GNP lawmakers, has been regarded as the party’s strongest presidential contender ever since she lost to Lee in the intra-party competition for presidential candidacy in 2007.

Celebrated professor and computer scientist Ahn Cheol-soo made his coming-out to the political arena early last month by hinting at running for Seoul mayor and announcing five days later his decision to back opposition candidate Park Won-soon.

During those five days, the shy but strong-worded entrepreneur-turned-professor who went on inspirational lecture tours for college students over the past three years beat Park Geun-hye in approval ratings. Despite his denial of any wish to pursue a political career, Ahn continues to be the biggest potential threat to the former GNP chairwoman. 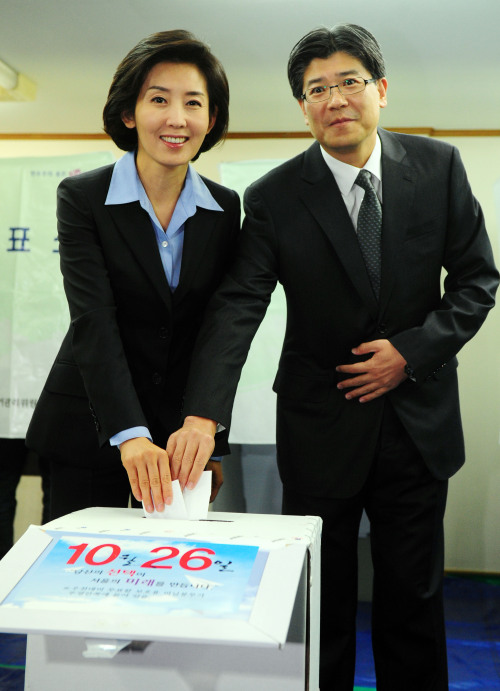 Ruling Grand National Party candidate Na Kyung-won and her husband cast their ballots at a polling station in central Seoul on Wednesday. (Kim Myung-sub/The Korea Herald)
Lee, in the meantime, has gone through a series of setbacks with two of his closest associates undergoing prosecutorial investigation for allegedly taking bribes in exchange for influence-peddling.

The prosecution earlier this month indicted Lee’s former top aide for public relations Kim Du-woo on bribery charges, concluding that he accepted cash, gift certificates and golf clubs worth a total of 130 million won from a lobbyist working for a corruption-ridden secondary lender.

Kim was asked to pull strings to ease regulatory inspections on Busan Mutual Savings Bank last year and get a Financial Supervisory Service official promoted early this year, the prosecution said. Kim continues to deny the charges. Sixty-five people have been indicted so far over the scandal surrounding the Busan savings bank.

Shin Jae-min, another Lee associate, also went under prosecutorial inquiry for spending nearly 100 million won ($90,000) with a corporate credit card provided by a businessman while serving as second and first vice culture minister in 2008 and 2009.

The latest blow to Lee was the opposition offensive on his May purchase of a housing lot in a previously greenbelt area in Naegok-dong, Seocho-gu, under his son’s name.

Lee wobbled out of the controversy by deciding to nullify the purchase and return to his old home in Nonhyun-dong, Gangnam-gu, which his office earlier said was inept as the cost of additional land for security service did not meet the budget.

The presidential office had initially called for a state budget of 7 billion won for the purchase of additional plot around the Nonhyun-dong residence, which ruling and opposition legislators cut to 4 billion won last year.

Lee is bound for St. Petersburg and Cannes next week for summit talks with his Russian counterpart and the G20 summit, the first of his three overseas trips slated for November.