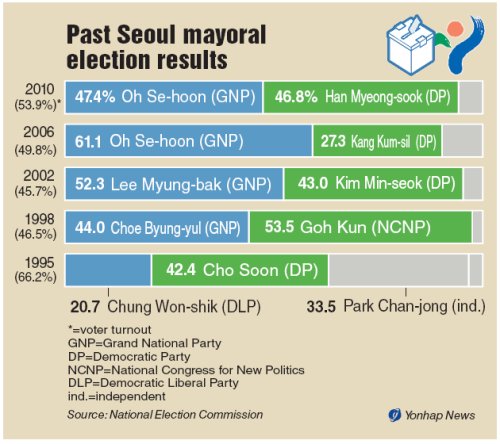 In terms of campaigning, the race for Seoul mayor was characterized by how relatively unflashy it was, focusing instead on volunteering and directly communicating with citizens.

The most conspicuous change from past races was the relative lack of loudspeakers, which were typical of street campaigning in the past.

The two candidates decided they should listen more and speak less to win the public’s heart, especially considering the public’s general discontent with politics and the ongoing economic difficulties.

The Grand National Party’s candidate Na Kyung-won chose “Communication with citizens” as her campaign motto, while the liberal bloc’s Park Won-soon went with “All ears tour.”

“We have kept the loudspeakers below 55 decibels, which is the average urban noise level,” said an official of Na’s camp.

Park’s aides also stressed that the purpose of campaign cars was to assist the candidate in reaching the people, and not just to play campaign songs in the streets.

Previous campaign vehicles such as 1.5 ton trucks were swapped for lightweight vehicles.

Na and her aides mostly relied on compact cars, which the party allocated to every branch office during the campaign period.

“We meant to be frugal and modest in this mayoral by-election that was caused by a former GNP mayor’s resignation,” said Rep. Kim Song-sik.

With the downsizing of the street campaigns, the number of canvassers from both camps was visibly reduced too.

Candidates, instead, focused on face-to-face meetings with citizens in the streets by touring crowded districts on foot or by public transportation.

Na spent most of her last campaign day on a subway and bus tour around the capital city, starting off from Seoul Station and ending in Myeong-dong.

She also allocated time to visiting traditional marketplaces, wearing a casual windbreaker to tone down her image as a wealthy politician.

Park, too, focused on talking to citizens on his walking tours of central Seoul and campaigns held at Gwanghwamun Plaza.

Both also busied themselves with volunteer activities in schools, daycare centers and nursing facilities.

As the by-election was the result of former Mayor Oh Se-hoon’s defeat in the free school meal referendum, welfare was a crucial keyword throughout the campaign.

Na promoted her stance on welfare, among other things, to regain confidence in the GNP from middle- and low- income voters.

In contrast to the relatively subdued street campaigns, online campaigning through Twitter and other social networking sites became more active.

Though the older voter-reliant conservative camp is generally considered vulnerable in the SNS arena, Na, one of the party’s top Twitter stars, fought her rival intensly online.