She did not think it would end in this way. But Wednesday Dec. 14 will mark the 1,000th and final weekly protest by Pak Ok-seon and other surviving “comfort women” in Korea.

The survivors of mass organized sexual slavery at the hands of the Japanese military throughout the Asia-Pacific region up to World War II, have been demanding the Japanese government’s apology for almost twenty years.

The women ― many of whom are now in their late 80s ― have campaigned every Wednesday outside the Japanese Embassy in Seoul since 1992. But now they are growing too frail to attend each week.

“In order to resolve this issue we have to go out there and fight,” said Pak, who is now 87.

She said it was “a shame” that their weekly protests were ending because “I want to continue fighting and demonstrating because that is the only thing that is going to help.

“It’s not that I want to keep demonstrating, but it is the only way to resolve the issue.” 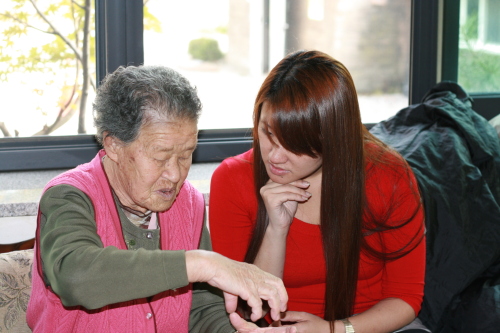 Pak Ok-seon talks on Sunday to House of Sharing volunteer Shannon Heit about her ordeals as a ‘comfort woman.’ (Kirsty Taylor)
Although she and the other remaining women are stepping down from their weekly podium, they and their supporters are not ready to accept defeat, pledging to keep telling their stories to keep the issue alive.

On the advice of a friend, Pak snuck out in the night from her home in Miryang, South Gyeongsang Province in 1941, in search of jobs and money to be made at a textiles manufacturing plant in China.

But instead of being recruited by Japanese occupying forces to work in the promised factory, she was taken with 20 other girls to a “comfort station” in Heilongjiang, Manchuria, where she was used as a sex slave for soldiers for four years.

The Korean Council for the Women Drafted for Military Sexual Slavery by Japan (the Korean Council) calls the “comfort women” system “a systematic and deliberate crime” committed by the Japanese government. Official historic records and personal testimonies have revealed that an estimated 50,000 ― 200,000 women from Japan’s occupied territories were forced into sexual slavery. Young women from Korea and other Asian nations were transported to Japan’s front lines ― in places like China, the Philippines and Taiwan ― where they were raped up to 40 times a day, starved, beaten, tortured and forced to have abortions if they fell pregnant.

Campaigners say that the Japanese government tried to cover up the atrocities at the end of the war ― destroying both records and witnesses through mass killings of comfort women.

“The war ended when I was 20 and still in a comfort station. The soldiers were trying to set the building that we lived in on fire and were trying to keep us from getting out, maybe to execute us,” recalled Pak.

Eventually, Pak found some ethnic Koreans living in the area, who took her in. She married one of the men and lived most of her life there.

She was eventually able to return to Korea in 2001 with the help of the House of Sharing, where she now lives with seven other “comfort women” survivors.

The house in Gwangju, Gyeonggi-do, is a sanctuary as well as a museum telling of the atrocities they suffered at the hands of Japanese soldiers. Visitors can attend information days and even spend the night with the women there.

A team of foreign and local volunteers leads English tours at the house and works to highlight the crimes suffered by its occupants, as well as sexual violence during war that women and children across the world continue to experience.

International outreach team volunteer Shannon Heit said, “These women were forced to stay at comfort stations against their will and raped and tortured every day.

“It is important to keep talking about these issues so that they will never be forgotten.”

Another volunteer, Fielding Hong, added, “I think that the Japanese government is just waiting for these women to die and that this issue will just go away.”

The House of Sharing volunteers and the Korean Council is calling on people to take part in an international solidarity campaign to ensure that this never happens.

The campaign will run from the International Day for the Elimination of Violence against Women on Nov. 25 to Dec. 14 when the 1,000th protest will be held before the Japanese Embassy in Seoul at 12 p.m.

They are asking people around the world to hold rallies or cultural events in their own communities.

But support at home has not always been constant. The Korean constitutional court ruled in September on a petition filed in 2006 by a group of 109 comfort women that the Seoul government had violated their basic rights by failing to make efforts to help them settle their disputes with the Tokyo government.

The “halmoni” (grandmothers) at the House of Sharing also said their neighbors had challenged them for continuing to raise the issue and even thrown stones at them when they went for walks in the surrounding countryside.

Nevertheless, hundreds of supporters are expected to add their voices to the halmoni’s sevenfold call at the Dec. 14 protest in Seoul. Their demonstrations have called relentlessly for the Japanese government to: acknowledge the war crimes; reveal the entirety of military sexual slavery; make an official apology; make legal reparations; punish those responsible; accurately record the crime in history textbooks; and erect a memorial for the victims along with a historical museum.

A peace monument will be unveiled at the 1,000th demonstration to keep the presence of the halmoni alive in front of the Japanese Embassy in Seoul, on what has now been named Peace Street.

Pak and the seven other House of Sharing residents may not be able to continue demonstrating, but she hoped that others would keep visiting to hear their stories and help them fight for justice.

She said, “If people come to the House of Sharing I am happy, there is no other way for me to feel about that.”