“I don’t want to go back!” the bubbly British blogger told The Korea Herald during an Interview in Seoul on Monday. She was scheduled to go to the airport to catch her flight back to London right after the interview. “Everything has been so amazing here.”

Cole was one of the seven foreign bloggers invited by Korean Culture and Information Service for a specially prepared six-day tour program in Korea. The bloggers strolled down the streets of Itaewon, saw ancient relics at the National Museum of Korea, and even watched a live episode of SBS’ K-pop show “The Music Trend” during their stay.

Wearing a bright orange cardigan and a fun pair of glasses, Cole’s eyes were still glowing with excitement though it was her last day in the country.

“I knew that I wanted to come back and visit,” said Cole, who taught English in Chuncheon, Gangwon Province, from 2008 to 2009. “But this tour made up my mind that I want to live here again.” 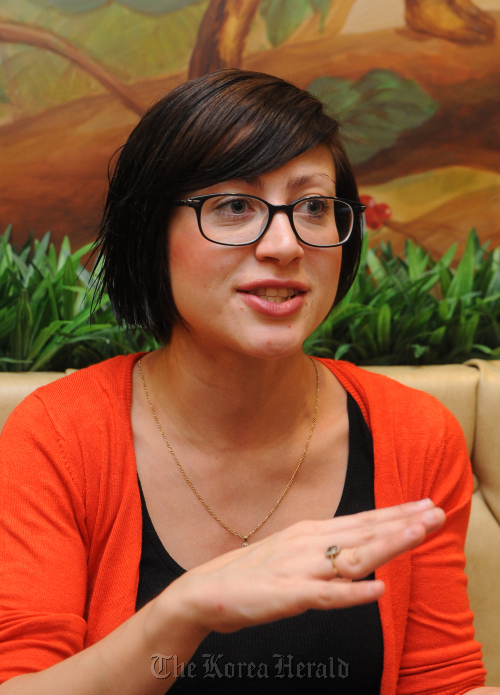 British blogger Anne Cole in Seoul, Monday (Lee Sang-sub/The Korea Herald)
Cole started her blog “Kimchi Soul” in 2009, after returning to London. It all started with getting involved in the K-culture scene in the city.

“I didn’t realize I would miss it so much,” she said. “I missed kimchi, I missed singing karaoke.”

Prior to starting her blog, Cole had started visiting Korean Cultural Center in London, as well as many K-culture events such as Korean film screenings, taekwondo workshops and cuisine sessions.

“It was the staff of Korean Culture Center in London that encouraged me,” she said.

“They said, ‘you need to share these with other people.’ So I started blogging essences of Korea within London as much as I could.”

“I love getting questions and that’s what I wanted,” she said. “I get responses from people who live in Korea, and even those who live in New York. It’s really encouraging.”

Though her first visit to Korea was in 2008, Cole had developed her love for the country a long time before.

Her experience in Chuncheon was a blast. She loved the taste of kimchi, sleeping on the warm “ondol” floor, and singing her nights away at karaoke.

“Everyone I met was very kind to me,” she said. “Whenever I struggled with directions looking at the public map, someone would come and offer help. People are one of the main things that made me fall in love with Korea.”

The blogger also had a lot to say about Korean cuisine. Being a vegetarian, she struggled to find the right menus when she first arrived in Korea. But as she learned to speak simple phrases such as, “Gogi bbae go juseyo” (please remove the meat from the dish) and “Gogi eop-neun geol-lo juseyo” (I’d like to have something that doesn’t have meat), a whole new world opened up.

While bibimbap was certainly her saving grace, she also enjoyed many vegetable side dishes, as well as gimbap rolls and kimchi jjigae. She eventually learned to cook the “homely” dishes on her own. Doenjang jjigae, a spicy soybean soup, was the first thing she learned, while kimchijeon, a Korean pancake-like dish made with kimchi, is one of her favorites.

“Many foreigners I met in Korea would often say, ‘it’s all meat here,’” she said. “But that’s not true. There are so many good, hearty veggie foods in Korea. I was living a very healthy life while I was here. I had lost weight and my skin looked better than ever.”

Cole, who is planning to come back to Seoul in the next year or two, said she’d like to see Korea being more accommodating of the disabled in future.

“I see so much respect for elders here, but not for the disabled,” she said. “I wish they are more accepted in future, and have more facilities to use.”

Cole’s blog can be found at www.kimchisoul.wordpress.com.