The famous lines are back, and so is the famous first-love saga. But this time it is on the stage, not the small screen.

Few would argue that KBS’2002 mega hit drama “Winter Sonata” was not one of the first examples of hallyu. Thanks to its enormous popularity, the main actor Bae Yong-joon rose to heartthrob status in East Asia, while its filming location in Chuncheon, Gangwon Province, has welcomed more than one million visitors in the last decade.

Previously, a different musical adaptation of the TV series was staged in several cities in Japan in 2006, including Tokyo, Osaka and Sapporo. According to Yoon, the Japanese version was a lot bigger in scale and much more tragic than the current production in Seoul. 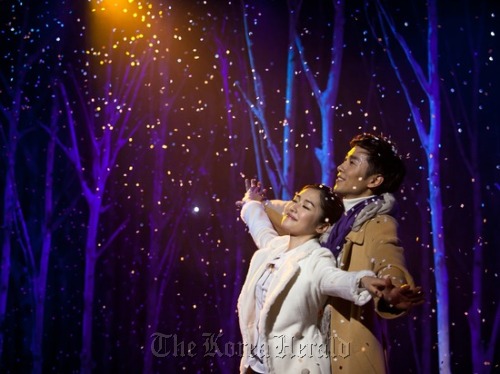 A scene from Musical “Winter Sonata.“ (Yoon’s Color)
And as Yoon noted, the show feels very much like the TV series. Its only stage background is the beautiful winter scenery of Nami Island in Chuncheon, Gangwon Province, which was the filming location of the drama.

Actor Kim Seung-hoe, who plays the main character Joonsang, almost uncannily resembles Bae Yong-joon. Every piece of clothing he wears, from the long winter coats to the matching scarves rolled around his neck, remind the audience of the legendary character of the TV show.

The show is 80-minutes long, considered short for a musical. Many of the subplots and minor conflicts have been cut from the original, and the holes are filled with newly composed musical numbers.

Lee Ji-soo, who produced the soundtrack of this year’s highly successful animated film, “Leafie, A Hen Into the Wild,” was in charge of writing new vocal pieces for the show.

But most of the audience  will fall for the variations of the original soundtrack of the TV series, which certainly compliment the show more than the newly composed scores.

Notably, “The Beginning,” an instrumental piece which was used as background music  for the TV show, is beautifully rearranged with lyrics for the musical adaptation. Kim Seung-hoe brings a prolific performance for the piece.

“Winter Sonata” isn’t exactly about magic and pain of first  love. It is a universal approach to a singular and  unrepeatable event, which cannot possibly be replaced by something else. As reflected in the repeated lines, the characters search for Joonsang and Yoo-jin, the very first and irreplaceable events of their lives.