But such multi-tasking keeps her motivated to play better concerts and communicate well with her fans, said Son.

She did 13 concerts in September and plans to perform eight times in October and six in November.

“When I’m on a stage, I try my best to enjoy it. I find it really fun to perform different repertoires at different concerts rather than doing the same things,” Son told The Korea Herald in a phone interview on Thursday, just before participating in the Seongnam Arts Center’s 2011 Matinee Concert for Liszt Piano Concerto No. 2. 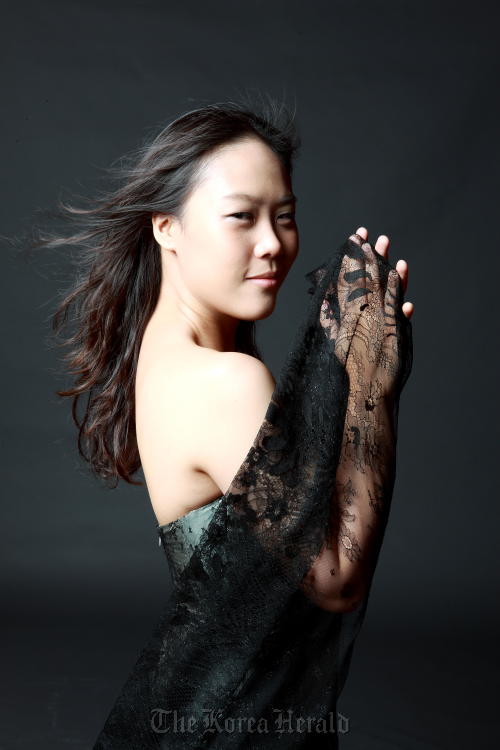 Pianist Son Yeol-eum (Kumho Asiana Cultural Foundation)
On Wednesday, the Tchaikovsky competition winning pianist is to collaborate with the Suwon Philharmonic Orchestra and pianist and conductor Kim Dae-jin, at the Gyeonggi Arts Center’s Grand Theater for the flamboyant and grand Liszt Piano Concerto No. 1, and colorful Piano Concerto No. 2.

“It is very rare that an artist performs both concertos at one place. It will be a good opportunity to listen to them in the same concert,” she said.

Son said she admires Liszt for his pioneering spirit.

“Liszt was a revolutionary figure in his time because he changed almost every existing rule,” she said.

“He was the one who established the concert format of today ― memorizing musical scores when performing and having a tour for a series of concerts. I wish the audience could also feel his revolutionary spirit.”

Son, 25, won second prize in piano at the 14th International Tchaikovsky Competition in Moscow in June. She earned international fame when she performed with Lorin Maazel and the New York Philharmonic Orchestra in 2004 in Seoul, Daejeon and Tokyo. In 2005, she was named Kumho Musician of the Year by Kumho-Asiana Cultural Foundation.

The pianist has been writing columns for Joongang Sunday for more than a year and she occasionally replies to Twitter messages sent from her fans.

“I can get direct feedback from the audience and that feedback affects my performance. Social networking does not bother me at all,” Son said.

She normally does not get nervous before a concert but when she does, she focuses on putting on her makeup ― an hour-long session.

“People ask me why I do the makeup myself when I can get someone else to do it, but that one-hour makeup helps me relax. I do it really meticulously when I do it,” Son said.

She said her most anticipated performances this year are the three concerts at Kumho Art Hall on the last Thursday of October, November and December that will celebrate the 200th year of the birth of Liszt.

The pianist’s life goal is to keep performing for the audience as a concert pianist as long as she can.

“Many musicians quit their performing career in their 30s or 40s and go in other directions like teaching. But I want to be a concert pianist until the end,” Son said.