Although many places claim to have the maddest, baddest chile this side of Hades, northeast India’s “ghost chile” is scientifically recognized as the hottest commercial chile pepper on the planet, 200 times spicier than jalapenos. The peppers are so hot that workers handling them wear goggles and gloves to avoid burns. 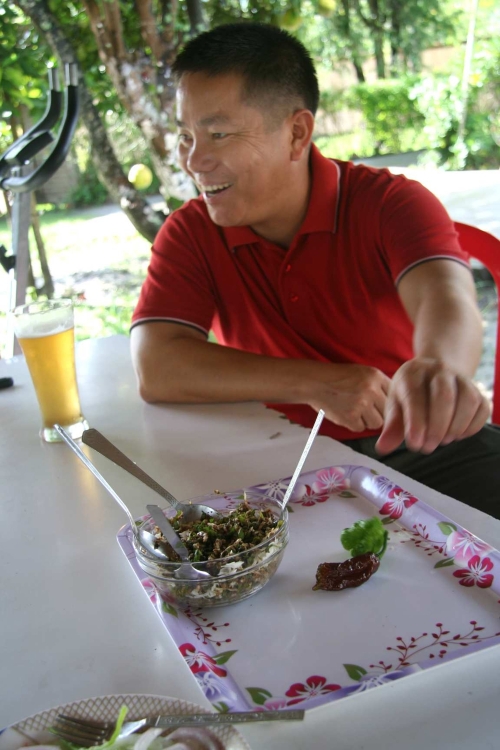 Government worker Thoudam Anand from northeast India enjoys his ghost chilies, recognized by the Guinness record book in 2006 as the world’s hottest — 200 times spicier than jalapenos.(Los Angeles Times/MCT)
Fall is peak season for this deceptively innocent looking, thumb-sized devil, which has different names in various parts of northeast India, including bhut jolokia, meaning ghost chile, and umorok, or tree chile.

Anand and his wife, Meena Longjam, settle down for a leisurely lunch under their gazebo as a fresh breeze wafts from the nearby jungle.

The carefully prepared meal starts with a dish of raw vegetables mixed with fragrant umorok fresh from the garden. They’ve toned it down for a visiting foreigner who thought he could handle the chile.

But the chile quickly shows who’s boss, creating a ribbon of fire from lips to tongue to newly upset stomach. The discomfort lasts several hours.

A few days later at the Imphal airport, a few souvenir umorok are confiscated as a potential hijacking weapon. “No Manipur chile allowed,” a policeman says gruffly.

The plump red and green chiles with wrinkly skin, which have grown naturally in northeast India for hundreds of years, are believed to be the result of a relatively rare natural mutation that strengthened their bite.

Here in Manipur state, most are grown by individuals and sold in local markets to spice up curries, sauces and pickles. In nearby Assam state, they are cultivated on commercial farms for export.

Chile peppers ― native to Latin America and the Caribbean and believed to date back more than 8,000 years ― were taken to Europe and then transported to Asia by traders hoping to build up Asian spice markets.