Red bean porridge, sweet or savory, steps outside winter for a fall outing

Patjuk, that comforting pottage of red beans, is often pigeonholed as a winter specialty, reserved, as turkey is for Thanksgiving, to be eaten on Dongji, the shortest day of the year.

And today’s eating habits remain rooted in tradition. Patjuk is still synonymous with the solstice, but as it was in the not too distant past, the porridge is seated in many a memory as something more than an age-old custom.

“After liberation from Japanese colonial rule and up until the Korean War broke out, we enjoyed sweet red bean porridge frequently,” Seoul’s Second Best Place owner Kim Eun-suk, 72, recalled. “It was thought to be the best snack one could have.”

“In the past, before there were refrigerators, danpatjuk (sweet red bean porridge) was only made in the winter,” Kim, whose tea house specializes in the sweet pottage, said. “Back then, after the sticky rice cake was made, it was set out to freeze so it would keep well. Then, when ready, the amount of rice cake needed would be sliced and toasted over a gridiron.”

Now, though, one does not have to wait till winter to dig in. 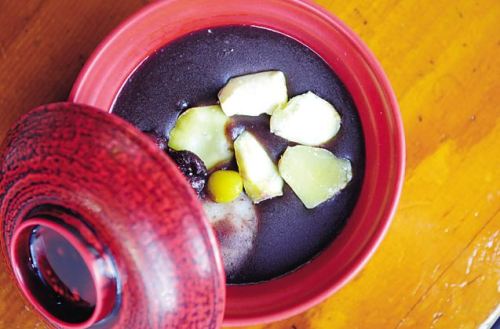 Danpatjuk is a trademark dessert of Seoul’s Second Best Place in Samcheong-dong. (Park Hae-mook/The Korea Herald)
Patjuk has become a perennial dish and can be found both in its dessert form and as a savory main meal in many tea shops, cafes and restaurants throughout South Korea.

At the famed Cheon Patjuk in Sindang-dong, customers drop by for a bowl of the red bean porridge on an autumn morning, and Seoul’s Second Best Place, in Samcheong-dong, is teeming with customers by noon.

Patjuk is still a popular dish, and one that can be enjoyed year-round as a meal or snack.

Of course, it is not just the porridge itself that attracts a constant stream of customers, places like Seoul’s Second Best Place, now into it’s 36th year of business, and Cheon Patjuk, which has been open for 13 years, have mastered the art of the seemingly simple dish, earning them devoted patrons over the years.

One might wonder why people will line up for a bowl of patjuk, but what appears to be a modest dish is anything but. Cooking up Patjuk is far more labor intensive than one might think, especially if everything is made from scratch.

Cheon Patjuk owner Jeon Che-ho revealed that the red beans for his establishment’s porridge spend an hour in a pressure cooker before being strained multiple times to achieve that wondrously refreshing, soup-like consistency.

The bird’s egg-shaped tteok that are generously added to the porridge are made fresh daily, and if you are lucky enough to come at the right time, you can watch as the rice cakes are hand-molded into dainty orbs.

At Seoul’s Second Best Place, the red bean paste, the base of the pottage, is made in-house along with the tteok.

Careful attention is paid to every aspect of the establishment’s trademark dessert, from the tteok down to the chestnuts.

“We source our chestnuts from Gongju City and Jeongan-myeon,” Kim cited areas (Jeongan-myeon, which is located in Gongju, even houses a “chestnut village”) famed for those autumnal nuts. “Right now we are using newly harvested chestnuts.”

That is probably why her danpatjuk tastes like a bit of fall. Each huge chunk of chestnut functions like a palatable comma, giving a moment of blissful pause before the next spoonful of sweet porridge.

At first glance, Kim’s danpatjuk looks relatively simple, a smooth, thick gruel sprinkled with beans, chestnuts, a solitary gingko biloba nut, cinnamon and punctuated by a huge ivory sphere of tteok; but the porridge is seamless in texture and not surface-level sweet. There is a depth of flavor. The chestnuts are meaty and faintly sugary, and the rice cake is melt-in-your-mouth soft and gooey.

When Seoul’s Second Best Place first opened in 1976, the initial plan was for oriental medicine to be the shop’s mainstay.

Kim put danpatjuk on the menu because she had a personal penchant for the dessert and was confident she could do it justice.

Patrons fell in love with the snack and danpatjuk became a popular shop staple.

Seoul’s Second Best Place is one of the few establishments where porridge is the solitary dessert on the menu, more often it is one out of several sweets served at a traditional tea house.

Even when patjuk is sold in its more savory form, it is tends to be one out of a line-up of various porridges available, but there are the occasional places, like Cheon Patjuk, that specialize solely in red bean porridge.

“Yes, you could say it is out-of-the-ordinary to focus on patjuk,” said Cheon Patjuk owner Jeon whose establishment whips up huge bowls of the porridge and sets out sugar and salt for customers to season as they wish.

Jeon is referring, in part, to the fact that he not only chose to specialize in patjuk, but that he chose to do so in the birthplace of those spicy, red rice cakes called tteokbokki.

“I lived in Sindang-dong for 30 years,” the 56-year old owner explained.

“Red beans are nutritious,” Jeon stressed the health-giving benefits of patjuk as one of the main reasons why he decided to serve it.

“I learned that it is popular in Jeolla Province during the summer,” he said.

To get there go to Sindang Subway Station Line 2, 6, Exit 4. Turn left into the street. Cheon Patjuk will be on the right, about a block down.