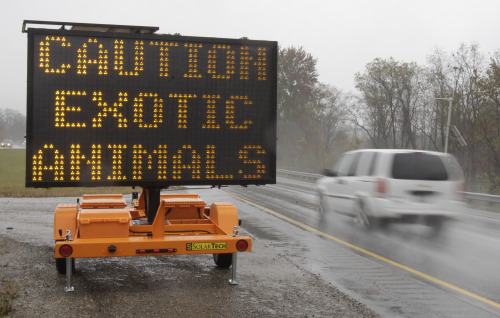 A sign warning motorists that exotic animals are on the loose rests on I-70 Wednesday, near Zanesville, Ohio. Police with assault rifles stalked a mountain lion, grizzly bear and monkey still on the loose after authorities said their owner apparently freed dozens of wild animals and then killed himself. (AP-Yonhap News)
ZANESVILLE, Ohio (AP) _ Police with orders to shoot to kill left 48 tigers, lions, and other wild animals dead Wednesday after their owner freed dozens of exotic beasts from his game preserve and then killed himself. Authorities don't know why he did it.

Officers with assault rifles stalked the animals overnight through the wooded rural area and were still searching for one last wolf and monkey still on the loose Wednesday afternoon. Area residents were told to stay indoors.

``This was a very, very bad situation,'' County Sheriff Matt Lutz told a news conference. ``These animals were on the move, and they were showing aggressive behavior.''

Animal bodies were seen scattered near a barn on the game preserve, and they were later buried there. Lutz said that it appeared Muskingum County Animal Farm owner Terry Thompson opened the farm's cages and gates and shot himself.

Startled deputies arriving on the scene Tuesday night saw aggressive animals near Thompson's body and outside the farm's fence and started shooting. The preserve also had cheetahs, wolves, giraffes, camels and grizzly bears, among others.

``To have no one hurt and killed here with 40-something animals loose was unbelieveable,'' Jack Hanna, former director of the Columbus Zoo, told CNN. ``This was like a bunch of loaded guns running around here.''

Also among the dead were 18 Bengal tigers, two grizzly bears and 17 lions.

It was as if Noah's Ark had wrecked in the middle of the United States, Hanna said. He stressed the danger of letting the animals roam.

``If you had 18 Bengal tigers running around, you folks wouldn't want to see what would happen,'' Hanna added.

Six surviving animals, including a grizzly bear, were taken to the Columbus Zoo.

Amid the confusion, there were multiple sightings of exotic animals up to about 10 miles (16 kilometers) away. ``Some sort of cat'' was hit and wounded on a local highway, Lutz said.

The sheriff defended the shootings, saying police had just an hour or so before sundown Tuesday and weren't carrying tranquilizer darts.

Even when one 300-pound (135-kilogram) animal was shot with a tranquilizer dart after animal authorities arrived, the animal ``went crazy,'' ran off and had to be shot, Lutz said.

Hanna defended the sheriff against criticism that the animals should have been captured alive.

``What was he to do at nighttime with tigers and lions, leopards, going out there?'' Hanna said. ``In the wild, this would be a different situation.''

Authorities would not say how Thompson killed himself, and no suicide note was found. Lutz said the sheriff's office had received numerous complaints since 2004 about animals at the property. Thompson had gotten out of federal prison just last month after serving a year for possessing unregistered guns.

Lutz told CNN that he had feared someday finding Thompson dead at his farm from an animal attack.

Ohio has some of the United States' weakest restrictions on exotic pets and among the highest number of injuries and deaths caused by them.

Neighbor Danielle White, whose father's property abuts the animal preserve, said Thompson had been in trouble because of repeated animal escapes. White said.

A few weeks ago, she had to avoid some camels grazing on the side of a freeway.

``It's always been a fear of mine knowing (the preserve's owner) had all those animals,'' she said. ``I have kids. I've heard a male lion roar all night.''

John Ellenberger, another neighbor, speculated that Thompson freed the animals to get back at neighbors and police.

``Nobody much cared for him,'' Ellenberger said.