[ The Korea Herald – Send E-mail ]
Royal books returned from Japan are invaluable historical record
By
Published : Oct 19, 2011 - 18:22
Updated : Oct 19, 2011 - 18:22
The five copies of Korean royal books that Japan’s Prime Minister Yoshihiko Noda returned during his visit to Seoul on Wednesday are historically significant as they are records of the royal rituals of kings Gojong and Sunjong, the last two emperors of the Joseon Dynasty and Daehan Empire before the Japan-Korea Annexation Treaty in 1910.

Noda arrived in Seoul on Tuesday with a total of five texts of the Uigwe: One copy of “Daerye Uigwe,” two copies of “Wangsejagaryedogam” and two copies of “Hongjae-jeonseo.” 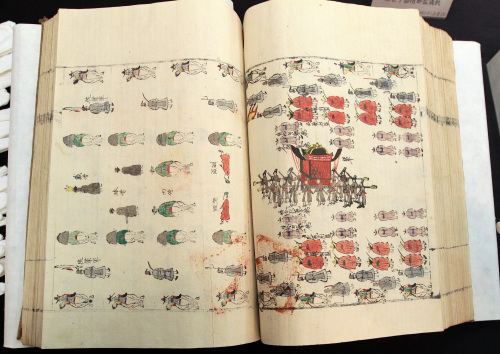 A copy of “Wangsejagaryedogam,” a record of the 1881 wedding of Sunjong, the last emperor of the Daehan Empire. (Yonhap News)
“Daerye Uigwe” is an account of King Gojong’s proclamation of the Daehan Empire and his coronation ceremony as its emperor in 1897. The empire, which succeeded the Joseon Dynasty, was annexed by Imperial Japan in 1910.

Ven. Hyemun, a Buddhist monk who has been calling for the return of the books along with other NGO groups, said “Daerye Uigwe” is one of the most significant copies of Uigwe that had to be returned to Korea from Japan.

“‘Daerye Uigwe’ is the book which contains Gojong’s vision for the country,” Ven. Hyemun, who visited Japan more than 40 times in the past five years, told The Korea Herald. “The book is the proof of his strong vision for a modernized, independent state. And by enthroning himself as its emperor, he made it clear that his position is equivalent to the one of Japan.”

“Wangsejagaryedogam,” on the other hand, is a record of Sunjong’s wedding in 1881, when he was a crown prince of the country. The fourth son of Gojong, Sunjong served as the last emperor of the Korean Empire until the 1910 Korea-Japan Annexation Treaty.

“Last year marked the 100th anniversary of the Japan-Korea Annexation Treaty, and it’s meaningful that the precious relics from the Joseon Dynasty are returned to their home country after a century,” Kim told The Korea Herald. “Secondly, we are receiving the largest number of relics since Japan returned 1,432 cultural artifacts back in 1965.”

According to Korea’s Cultural Heritage Administration, 167 Uigwe books ― along with some 1,000 other relics ― stored at the royal Gyujanggak library in Seoul and a Buddhist temple on Mount Odae in Gangwon Province were looted by the Japanese.

Japan’s Governor-General Office in Korea, under the supervision of then Resident-General Hirobumi Ito, took the books to Tokyo in 1922. The books have been stored at the Imperial Household Agency ever since.

The existence of the royal books at the Imperial Household Agency in Japan had been unknown until early 2001. Volumes of Uigwe therefore weren’t included in the list of cultural artifacts to be returned to Korea from Japan in 1965, when the two countries signed a treaty on basic relations which normalized diplomatic ties. At the time, Tokyo officially returned 1,432 cultural artifacts out of the 4,479 requested.

Tokyo agreed to return a total of 1,205 looted Korean books, including 167 volumes of the Uigwe in November of last year. All the promised relics will be returned to Seoul by December, the cultural administration said.