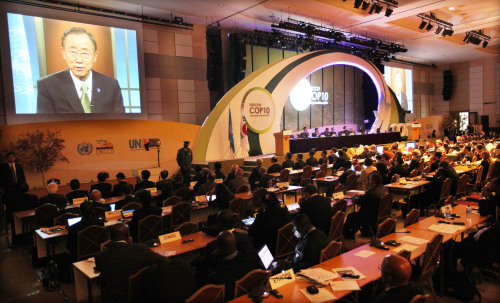 U.N. Secretary-General Ban Ki-moon delivers a congratulatory video message for the opening of the senior officials’ session of the UNCCD COP 10 in Changwon on Monday. (Yonhap News)
The world’s only legally binding forum against desertification announced on Tuesday its roadmap, dubbed the Changwon Initiative, renewing 194 countries’ commitment to land regeneration.

The 10th session of the United Nations Convention to Combat Desertification, taking place in Changwon, has been discussing measures to combat desertification, gathering over 1,100 policymakers, scientists, potential investors and executives from the private sector.

Action plans in the Initiative include new partnerships to be made between governments and private companies, investments to save soil and plans to set standards to monitor the severity of land degradation. Korea Forest Service, the event host, said the move will accelerate the execution of the 10-year plan that existed before the 10th forum began in Korea.

“Land care provides a sound, knowledge-based approach from the bottom up,” Luc Gnacadja, chief of the UNCCD, said at the forum. 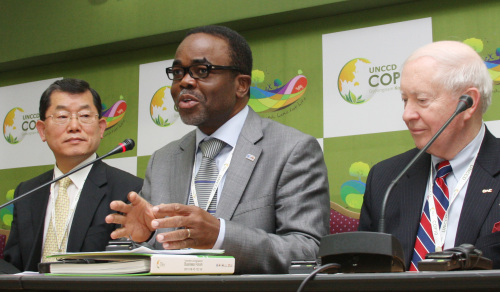 UNCCD Executive Secretary Luc Gnacadja (center) announces the results of the business forum that took place on the sidelines of the UNCCD COP 10 in Changwon on Tuesday. (Yonhap News)
“Land care is all about grassroots support for land restoration and land regeneration, and that’s what makes it so valuable for the UNCCD, because we’ve learned over the years that bottom-up approaches of communities taking charge of their environment, grappling with their problems, and drawing in support from outside is the key to land regeneration throughout the world.”

The Changwon Initiative was announced at the forum’s high-level meetings on Monday and Tuesday, where delegates from the United Nation’s organizations and ministers from 44 countries attended. They included Ahmed Djoghlaf from the U.N. Convention on Biological Diversity, Achim Steiner from the U.N. Environment Programme and Michael Jarraud from the World Meteorological Organization.

U.N. Secretary-General Ban Ki-moon, in his video message to the conference, emphasized that fighting desertification is an essential task for all for the sustainable development of the current generation.

“The world needs a fresh approach to protect the environment while ensuring economic and social benefits in the process. More public awareness is needed for that and I hope global commitment for soil regeneration to come in Changwon, South Gyeongsang Province,” he said.

According to UNCCD, arable land is decreasing by 1 percent each year, affecting the businesses and health of 1 billion people. Korea in particular is plagued by annual dust storms as the Gobi Desert in China grows larger every year. In the 1980s, yellow dust storms from Central Asia hit the Korean Peninsula for 3.9 days a year. This grew to 7.7 days in the 1990s and to 12.4 days in the 2000s.

Korea Forest Service estimates North Korea has lost territory about 20 times the size of Seoul over the past decade due to desertification. The communist country has about 2.84 million hectares of wasteland as of 2008 after it misused more than 32 percent of its forest.

The UNCCD COP 10 also carried out a private sector forum on the sidelines. The two-day forum on Monday and Tuesday gathered the leaders of environment-conscious brands such as Unilever, Nestle and Cargil to discuss business opportunities in restoring wasteland. Other agendas on the table included how to improve the conditions of affected ecosystems and long term benefits for corporations for financing restoration projects.

“Combating desertification may not provide immediate returns for investments, so governments should integrate their own efforts with those of the business community and civil society,” the joint declaration by participating business leaders and the UNCCD forum said.

“The forum examined current efforts toward combating desertification by the private sector and at national level. The participants, including representatives from land and forest-related organizations and academia, examined the challenges around the world, by sharing cases from South and North Korea to Mongolia, China, Southeast Asia and Africa.”