The Paris meeting of the world’s leading economies this weekend was a step forward in improving the financial safety net protecting the market from destabilizing capital movements, Finance Minister Bahk Jae-wan said.

The G20 finance chiefs agreed to allow the International Monetary Fund run a fresh short-term liquidity instrument, a safety net to fund member nations in times of a severe credit crunch as capital exits fast. The group agreed to set out details by G20 Cannes Summit slated for Nov. 3-4.

Bahk, speaking at a press briefing after the meeting, said the progress on Korea-initiated agenda may “fall short of expectations” but emphasized that it is meaningful in that it “re-reignited waning interest on this pending issue.”

The idea is to pull global and regional funds together to safeguard those countries from risky outflows of capital. The IMF currently has $590 billion on hand to help countries in short of capital.

The agreement is extension of what G20 had agreed upon at the Seoul summit last November. There, Korea called for the world to build a stronger mechanism to protect economies against massive flows of capital ― a role traditionally given to the IMF. 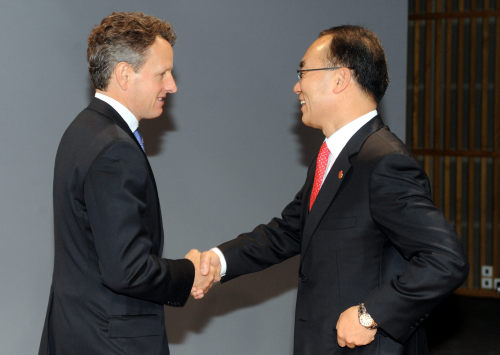 Some resistance was noted.

U.S. Treasury Secretary Tim Geithner stressed that while the IMF should continue to play its important role in containing the financial turmoil, it did not need any more funding.

Referring to IMF’s $590 billion lending base as “very, very substantial amount of financial firepower,” he said G20 would be support of boosting IMF role after Europe unveils its debt restructuring plans and turns out that the region needs more used of the fund’s existing resources.

The communiqu released after the two-day meeting stated that the G20 recognized that “central banks play a major role in addressing global liquidity shocks.”

“We committed that the IMF must have adequate resources to fulfill its systemic responsibilities and look forward to a discussion of this in Cannes,” it said.

President Lee Myung-bak had mentioned of the need for a currency swap between Korea and the U.S. in his official visit to Washington last week, but Finance Ministry and Central Bank here remained muted about the idea.

Finance Ministry has been stressing that Seoul’s $300 billion-plus foreign exchange reserves are enough to avert financial turmoil and stabilize the Korean won.