President Lee Myung-bak’s state visit to the United States was a demonstration of their stronger alliance through the U.S. Congress ratification of the bilateral trade agreement.

Lee returned home Sunday, wrapping up his five-day trip to the U.S., highlighted by the trade deal ratification on top of reaffirmation of their traditional political and military alliance.

The U.S. Senate and House of Representatives passed the free trade agreement while Lee was in town, Wednesday, just a day before his summit talks with U.S. President Barack Obama in Washington, D.C. The U.S. government also invited Lee to an unprecedented security briefing at the Pentagon. Obama also took Lee out to a private dinner at a Korean restaurant. 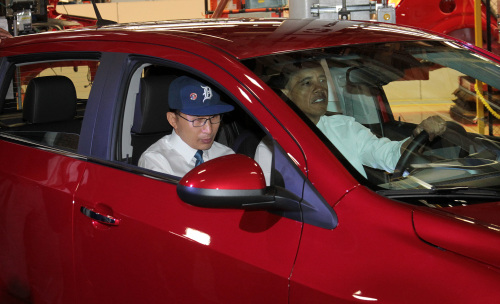 President Lee Myung-bak and U.S. President Barack Obama sit in a car together during their visit to a General Motors’ assembly line in Detroit on Friday. (Yonhap News)
On Friday, Obama accompanied Lee to a General Motors factory in Detroit to trumpet the gains of the FTA. It was a move to show their commitment to the trade agreement, which was signed in 2007 and revised late last year mainly due to complaints from American automakers.

All these indicate the upgrade of their alliance through the ratification of the trade agreement and the ever-growing importance of Korea for the U.S.

“The commitment of the United States to the defense and security of the Republic of Korea will never waiver,” Obama told a joint press conference. He called the alliance “unbreakable.”

Lee repeatedly stressed the trade agreement, saying that it opened up a new chapter in the countries’ 60 years of political and military alliance.

Lee’s visit to the U.S. culminated with the ratification of trade deal and his joint visit to a U.S. car assembly line. On their visit to a GM factory, they emphasized the significance of agreement.

“Here in the United States, this trade agreement will support at least 70,000 American jobs. It will increase exports. It will boost our economy more than our last nine trade agreements combined.”

Lee stressed that the Korea-U.S. FTA will create more jobs for Americans, contrary to concerns held by some.

The U.S. ratification of the free trade agreement puts pressure on South Korea’s National Assembly to follow suit. The deal now stands at a parliamentary trade committee and faces a last-minute clash between rival parties over its ratification.

As always, North Korea was a key topic for Lee’s trip to the U.S. Both leaders pressed the communist nation to give up its nuclear ambitions. Lee said that he and Obama have been and will remain in complete agreement on North Korea.