WASHINGTON, D.C. ― President Lee Myung-bak on Thursday said Korea and the United States have agreed to develop their ties into an “even stronger alliance,” a day after the U.S. Congress ratified the two countries’ free trade agreement.

“Here, where the Mutual Defense Treaty was signed by Korea and the United States in 1953, a new chapter in our relationship has opened. Our relationship has become stronger,” Lee said in a speech to a joint session of the Congress, the third day of his five-day official visit to the U.S.

The U.S. Senate and House of Representatives on Wednesday passed the KORUS FTA, which was signed in 2007 and revised late last year, passing the baton to the Korean National Assembly.

Lee thanked the members of the U.S. Senate and House for ratifying the pact, which he called another milestone in relations between two countries after a 1953 defense agreement forged at the end of the 1950-53 Korean War, in which the U.S. fought alongside the South against invading troops from the communist North.

“Perhaps you have heard what the experts have said: America’s economic output will grow more due to the Korea-U.S. FTA than from America’s last nine trade agreements combined.”

“In this century, much has changed but not this basic truth: Open markets build strong economies.”

Earlier in the day, Lee held a summit talks with U.S. president Barack Obama where they reaffirmed their countries’ close ties, expressing confidence that the landmark FTA will upgrade their 60-year-old military alliance.

“For the last 60 years, we have maintained a strong political, military alliance. Now the Korea-U.S. FTA signals the beginning of an economic alliance. This alliance will strengthen and elevate our military and political alliance to a whole new level,” Lee said during a joint press conference after summit talks at the White House. 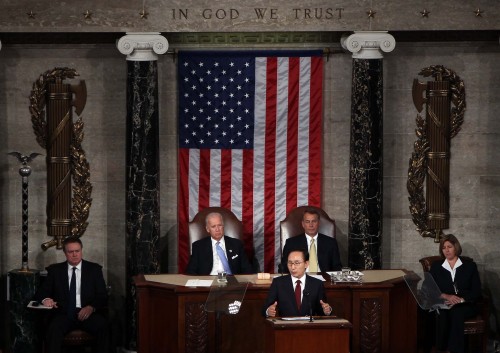 President Lee Myung-bak delivers a speech at a joint session of the U.S. Congress in Washington on Thursday (early Friday morning, Korean time) during his state visit to the country. (Yonhap News)
Obama said: “I can never say it enough: The commitment of the United States to the defense and security of the Republic of Korea will never waver and as we have for decades, the United States will maintain our strong presence in the Asia-Pacific which is a foundation for security and prosperity in Asia in the 21st century.”

Lee also said the envisioned project to pipe Siberian gas through North Korea to South Korea “will take some time,” and that he expects it to help improve inter-Korean relations and break the North Korean nuclear stalemate.

“Russia and North Korea are in talks (over the pipeline plan), but it has not been discussed among the three countries yet,” he said.

Obama also said that North Korea “continues to pose a direct threat to the security of both our nations” and that Seoul and Washington “are entirely united” on how to deal with Pyongyang, saying they have “succeeded in changing the equation with the North by showing that its provocations will be met, not with rewards, but with even stronger sanctions and isolations.”

“So the choice is clear for North Korea. If Pyongyang continues to ignore its international obligations, it will invite even more pressure and isolation. If the North abandons its quest for nuclear weapons and moves toward denuclearization, it will enjoy greater security and opportunity for its people. That’s the choice that North Korea faces,” he said.

In reference to the democratization movements in the Middle East, Obama said North Koreans would have the same desire as other people for freedom of speech and the right to decide their own destiny.

Lee said that Seoul and Washington would continue to work closely together on North Korea.

The only way for North Korea to ensure happiness of its people is “to abandon its nuclear ambitions,” Lee said, adding that Seoul will “speak with one voice” with the U.S. on North Korea issues.

The Obama administration has backed the South’s position on the North, maintaining that improvement in inter-Korean relations is a precondition for better ties between Washington and Pyongyang.

While their husbands held the summit talks on Thursday, First Lady Kim Yoon-ok and her U.S. counterpart Michelle Obama visited a public high school in Annandale, Virginia, in the outskirts of Washington D.C. The two first ladies watched musical performances by the students and encouraged them to work hard in pursuit of their dreams.

Lee and Kim attended a state dinner hosted by Obama Thursday evening at the White House, to which U.N. Secretary General Ban Ki-moon and a number of Korean-American celebrities including actor John Cho, novelist Lee Chang-rae and chef David Chang were also invited.

Lee flew over to Detroit on Friday to visit a General Motors plant with Obama. Lee was to travel to Chicago later in the day and head back home on Saturday. The president is scheduled to arrive in Seoul on Sunday.