WASHINGTON D.C. ― The U.S. Senate and House of Representatives were set to pass the Korea-U.S. free trade agreement on Wednesday, a day ahead of President Lee Myung-bak’s summit talks with U.S. President Barack Obama.

The U.S. Senate Finance Committee on Tuesday approved the FTA bill, sending it to the floor for a vote by the Senate. The committee also endorsed FTAs with Colombia and Panama.

The House Ways and Means Committee promptly passed the FTAs submitted to Congress a week ago by Obama. The House was also scheduled for a floor vote on Wednesday.

Lee, on a five-day official state visit focused on the passage of the FTA that has dragged on since its signing in 2007, is scheduled to deliver a speech to the Senate and the House Thursday after the summit meeting with Obama.

The South Korean parliamentary panel on foreign affairs, trade and unification is scheduled to discuss the FTA bill on Thursday, Seoul time, hours after the U.S. Congress passes it.

Ruling Grand National Party leader Hong Joon-pyo said Wednesday that the National Assembly should ratify the FTA and 14 related bills within this month.

Korea’s top negotiator for the FTA, Kim Jong-hoon, said that once the U.S. approves the deal, it will be “just a matter of days, at the very longest just a matter of weeks,” before South Korea follows, according to the Washington Post.

The bilateral free trade pact was signed in June 2007 and revised in December last year largely due to complaints from U.S. automakers.

Korea made substantial concessions in auto trade to save the FTA, while the U.S. dropped its demand that Korea open up its market more for U.S. beef. 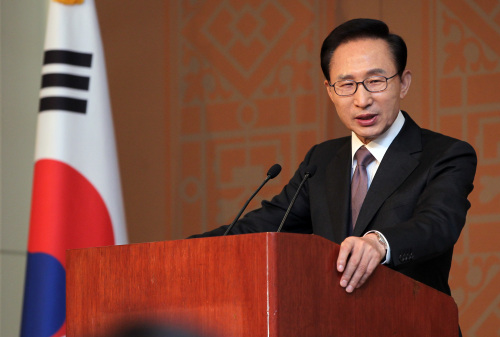 (Yonhap News)
Lee is scheduled to visit Detroit, home to the three largest U.S. automakers, on Friday with Obama to speak on the mutual economic gains of the FTA.

Lee highlighted the importance of the FTA for Korea’s export-driven economy during his meeting with Korean residents in the U.S. capital Tuesday evening upon arrival.

“Korea will be the only country to have FTAs with the 27 member countries of the European Union, India, which has a population of 1.2 billion, the 10 ASEAN countries and the U.S.,” Lee told about 350 Korean residents in a local hotel.

“We can say that our economic territory will be bigger than America’s.”

More than 170,000 South Koreans reside in the Washington D.C. area.

Lee is the sixth South Korean president to make an official state visit to the U.S. The last to visit was former President Kim Dae-jung in 1998.

In an interview published by the Washington Post Wednesday, Lee said that Seoul had observed “real” changes in North Korea, while affirming his principle that Pyongyang’s commitment to denuclearization is a prerequisite for better relations.

“There are some real changes we are detecting,” Lee was quoted as saying.

“In the past, if we had dialogue between the two Koreas, it was never about nuclear weapons. The discussion was only about when and how much aid we would give.”

Chief executives and vice presidents of American companies such as Citigroup, Cargill, Gale International, Chevron, Pfizer and the Carlyle Group attended the Korea-U.S. CEO roundtable and a business luncheon hosted by the U.S. Chamber of Commerce.

On Thursday, Lee will hold summit talks with Obama during which the two leaders will reaffirm their countries’ alliance and hold a strategic dialogue on North Korea, Northeast Asia and issues of global concern.

Lee will then attend a luncheon jointly hosted by U.S. Vice President Joe Biden and Secretary of State Hillary Clinton, after which the U.S. government is scheduled to announce its participation in the World Expo in Yeosu next year.

After giving a speech to the U.S. Senate and House Thursday afternoon, Lee is slated to attend a state dinner hosted by Obama.

On Friday, Lee will hold a breakfast meeting with U.S. policy opinion leaders and an interview with U.S. media, then stop by Detroit before a dinner meeting with business leaders in Chicago.

The president is scheduled to meet with Korean residents in Chicago Saturday before heading back home. Lee will arrive in Seoul on Sunday.