Scuffling through a wet postseason, the Detroit ace and likely AL Cy Young Award winner left a start early again Saturday night when a pair of rain delays prevented him from pitching more than four innings. He wound up the loser as the Tigers fell 3-2 to the Texas Rangers in the opener of the AL championship series.

Verlander wasn’t his usual, dominant self. The Rangers scored twice in the second and got a solo homer in the fourth, matching the number of runs he’d allowed in all 21 previous innings he’d pitched at Rangers Ballpark.

He’d thrown only 82 pitches, though, when the first delay hit. After a 41-minute wait, the Tigers scored twice and had the bases loaded when more rain fell, delaying the game again for 1 hour, 9 minutes.

“When the original one hit he was actually coming back out,” Tigers manager Jim Leyland. “When the second one came about, that was a no-brainer. I think that this was a little bit of a weird night, obviously, with the rain the way it was.” 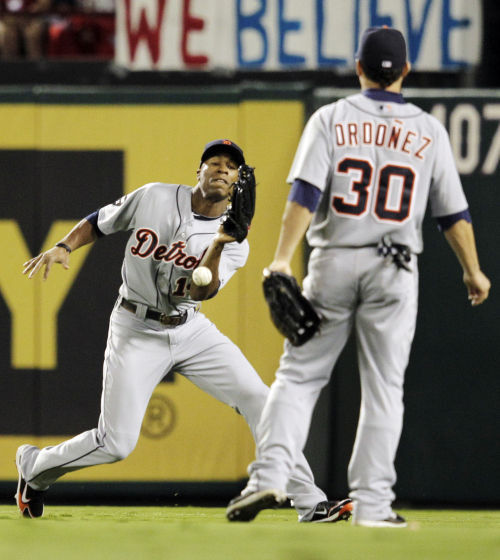 Detroit Tigers center fielder Austin Jackson misses a fly ball during Game 1 of the ALCS. (AP-Yonhap News)
So Mother Nature knocked out Verlander, not the Rangers. It was the same thing in Game 1 of the AL division series, when he threw just 25 pitches against the Yankees before a storm hit. The game resumed without him the next day.

Verlander returned three days later for Game 3, which he won. Leyland resisted the temptation of bringing him back on short rest out of the bullpen in Game 5, and seemed to be rewarded with having him for this game.

Verlander gave up five hits and walked two. He also struck out five. He didn’t have a single clean inning, with the Rangers reaching via hit or walk every frame.

Rick Porcello, Detroit’s announced starter for Game 4, replaced Verlander and pitched two scoreless innings. A series of relievers shut down the Rangers the rest of the way, but the Tigers couldn’t get anything going against Texas’ bullpen, either.

“I guess it’s a little weird Verlander was involved in both these rain situations,” Lyland said. “And truthfully, we’re going to go back when I get done with you guys and figure out what we’ll do now with the pitching.”