He was a conjurer, a modern magician who reached into tomorrow and came up with things that changed millions of lives. And as people gathered at Apple Stores from Sydney to San Francisco to mourn Steve Jobs, the feeling was more than grief for an executive or even an inventor. It was something closer to awe for a wizard.

On Thursday, the admirers who turned his technological marvels into everyday tools used them as instruments of grief. People held up pictures of candles on their iPads, booted up their MacBook Pros to watch old Jobs presentations on YouTube, used their iPhones to sift through remembrances on Twitter. 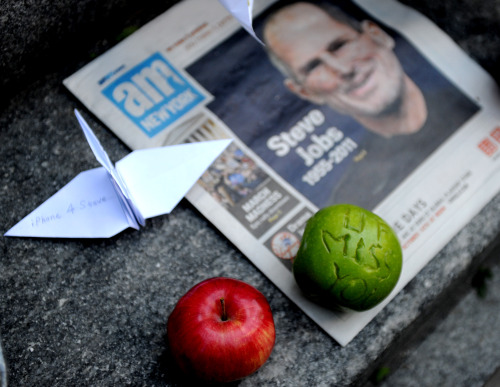 Apples are placed outside the flagship store of Apple on the 5th Avenue in New York, the United States, Oct. 6, 2011. New Yorkers came here on Thursday to offer their condolences to the Apple Inc co-founder and former CEO Steve Jobs, who passed away on Wednesday at the age of 56. (Xinhua-Yonhap News)

They grieved his loss through devices that before his time, or without his vision, would have been considered beyond humanity‘s reach.

Ten years ago, the only people who carried their music around were tech geeks, music obsessives and those willing to tote a clunky CD player. Presto — the iPod, and everyone wanted one. And then another and another.

Five years ago, cellphones had hinges, and the displays looked more like the age of Atari than the age of the Internet. Texting, for the most part, was a matter of cryptography, tapping out strings of numbers to make words. Presto — the iPhone, and everyone wanted one of those, too.

Two years ago, the economy had just tanked, and it was hard enough for companies to persuade people to buy the things they needed. Getting people to buy a product they didn’t need was out of the question. Most people already had a desktop computer, or a laptop, or a smartphone. And yet, presto — the iPad.

Nothing up his sleeve. Though Jobs, ever the showman, once reached into the tiny fifth pocket of his trademark blue jeans at an Apple event and fished out an iPod Nano, just to emphasize how small the gadget was. They always were. Ever smaller, ever sleeker, ever cooler.

Anne Sweeney, the president of Disney and ABC, remembered when Jobs flew from Cupertino, Calif., to Burbank to persuade her to license ABC shows to be shown on the tiny screen of his newest invention, the video iPod. He wowed them by playing an episode of ABC‘s own hit show, “Lost.”

Sweeney was so bowled over she forgot to ask where he got a copy of the program.

“I thought, ‘He’s Steve Jobs. He can do anything,’” she remembered.

One day after his death, two days after Apple introduced the latest incarnation of a touch-screen phone that touched pop culture, sadness and admiration poured out — not for a rock star, not for a religious figure, but for an American corporate executive.

“He was a genius,” Rosario Hidalgo said outside an Apple Store on the Upper West Side of Manhattan while her daughter, 21-month-old Carlotta, used an iPhone to play an app that teaches children to match animal sounds to animal pictures.

For people who have grown up in a world where iPod headphones are as ubiquitous as wristwatches were to a previous generation, Jobs was remembered as their Elvis Presley or John Lennon. Perhaps even their Thomas Edison.

“It‘s like the end of the innovators,” said Scott Robbins, 34, who described himself as an Apple fan of 20 years and who rushed to an Apple Store in San Francisco when he heard the news.

Apple announced Jobs’ death Wednesday night and remembered him as a “visionary and creative genius.” The company announced no cause of death, but Jobs had been diagnosed with a rare pancreatic cancer seven years ago and had a liver transplant in 2009. He was 56. The company did not release any details about Jobs’ funeral; a spokesman said there would be no public services.

On Thursday, the Apple website, which usually features slick presentations of multicolored iPods and ever-thinner MacBook laptop computers, simply displayed a black-and-white photo of Jobs, thumb and finger to his beard as if in contemplation.

Around the world, tributes sprang up of the highest and lowest technology.

In the Ginza shopping district of Tokyo, people held up iPhones and iPads, their screens facing outward and displaying sharply defined, touchable graphics of flickering candles.

At an Apple Store in Hong Kong, old and new means of grief came together: People scribbled “RIP” and “We miss Steve” and longer notes of condolence on Post-It notes, and stuck them to an iPad display.

And at the 24-hour Apple Store in midtown Manhattan, the remembrances were more traditional. Passersby left flowers and candles, actual ones. Even there, people snapped pictures of the memorial with their iPhones.

“I was so saddened. For me it was like Michael Jackson or Princess Diana — that magnitude,” Stephen Jarjoura said at the Apple Store in Sydney. His said Jobs left a legacy to rival Edison and Albert Einstein.

Philippe Meunier, a senior partner of a Canadian ad agency who was visiting New York from Montreal, reflected on how weird it was to receive the news of Jobs’ death on the phone he invented.

Even in Syria, seven months into an uprising, people paused to take pride in Jobs, whose father was born in Homs, the third-largest city.

“This shows that this country can produce geniuses, if only we had freedoms instead of a suffocating dictatorship,” said Sara, a 23-year-old Syrian student who refused to give her full name for fear of Syrian government reprisal.

Apple has sold 129 million iPhones and 29 million iPads. And in the decade since it revolutionized the music industry by offering “1,000 songs in your pocket,” it has sold 300 million iPods, or roughly enough to outfit every person in the United States.

Famously devoted to Apple products — and often mocked, it must be said, by people who are not — even the acolytes of Jobs paused to reflect on how deeply his creations were enmeshed in their lives. Seamlessly, of course.

“I‘m Apple everything,” said Alison Brie, who plays Annie Edison on the NBC comedy show “Community.” ’‘It’s changed the way we listen to music and watch TV, connect to fans. Twitter on my phone is — it‘s huge.”

In New York, a family visiting from Norway waited for the 9 a.m. opening of an Apple Store. Jorund Skurdal said his family owned about 15 Apple gadgets, including “a couple iPads, iPods, an iMac, an iBook, and some other things.”

Five-year-old son Carsten already had his own MacBook, and 3-year-old Sanna was an iPod fan. Carsten had just bought a new app yesterday — Life of George, an interactive Lego game.

“He was one of a kind,” Skurdal, who lives in Oslo, said of Jobs. “He was able to take these boring computer items and make them accessible, usable and very sexy.” His main interest now, he said, “is that the company survives, and thrives. I think it will.”

Jobs’ death came a day after Tim Cook, who took over as Apple CEO when Jobs stepped down in August, presided over the launch of the iPhone 4S. It was the first time in years Apple had launched a major product without Jobs to advertise it in his trademark jeans and black mock turtleneck.

Apple stock, which traded at about $5 a share when Jobs assumed the CEO job for the second time in 1997, passed $400 earlier this year. Investors have worried for years about what would happen to the company without him.

Because so many products that were graced by the Jobs touch are still in the sales pipeline, it will take years to measure the impact of his death. On Thursday, the stock fluctuated, but only by a couple of percentage points. It closed down 88 cents at $377.37.

In a measure of his impact on personal technology, Jobs was venerated by his fiercest competitors in the hours after his death.

Bill Gates, the co-founder of Microsoft, a company that Apple once treated as Goliath to its David and then blew past in market value, said it was” an insanely great honor” to have known Jobs. A statement of grief came from Sony, whose Walkman and Discman were buried by the iPod.

Google added a link to the Apple site on its famously minimalist search page. Mark Zuckerberg, the founder of Facebook, thanked him for changing the world.

To the extent that there is an online version of the old-time public square, it was overrun Thursday by remembrances of Jobs.

On Twitter, where the most popular “trending” topics change by the hour, “ThankYouSteve” and “iSad” were still high on the list a day after his death.

On Facebook, people posted revisions of the Apple logo, a stylized apple with a detached leaf and a half-moon bite taken out. One added a frown and tears to the apple. Another replaced the bite with a silhouette of Jobs himself.

Heads of state around the world added their thoughts. President Barack Obama said Jobs exemplified American ingenuity. Mexico‘s President Felipe Calderon bemoaned the loss of “one of the most visionary minds of our times.” India’s Prime Minister Manmohan Singh said he was “deeply saddened.”
<관련한글기사>