The country’s top professional baseball league wrapped up its regular season on Thursday night and is now gearing up for what looks like a promising postseason starting Saturday.

The defending champion SK Wyverns will face the Kia Tigers in the first round. The two teams met in the Korean Series in 2009 when Kia fended off the Wyverns’ strong challenge to claim the title.

This year, the third-place Wyverns were running closely behind top-ranked Samsung Lions most of the season, but failed to secure the runner-up position after losing to the Lotte Giants in their final head-to-head series last month.

The fourth-place Tigers hold a slight edge over the Wyverns with an 11-7 record this season, but the odds favor the Wyverns, as manager Lee Man-soo’s side has a tradition of playing remarkably in the playoffs.

Observers expect the best-of-five series will come down to SK’s bullpen versus Kia’s starting pitching, as both sides boast top pitchers in the league. 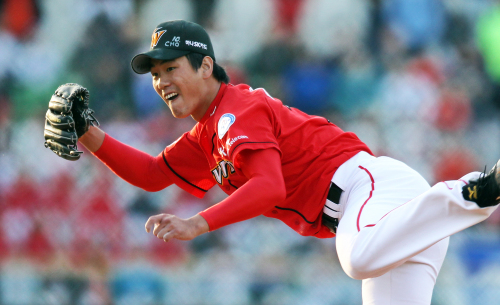 Wyverns ace Kim Kwang-hyun is expected to be back at full strength. (Yonhap News)
Tigers’ ace Yoon Suk-min finished the regular season with the most wins with 17, while the Wyverns boast a strong bullpen, including closer Uhm Jung-wook and Jung Dae-hyun.

The good news for Lee is the return of Kim Kwang-hyun, his most formidable pitcher.

The 23-year-old left-hander, who had a four-month hiatus due to injury, recently made a strong comeback and is now looking to reclaim his form in the playoffs.

The two sides play the first two games at the Wyverns’ home in Incheon this weekend, and after a one-day break will meet again in Gwangju on Tuesday.

The winner of the first round will meet the Lotte Giants in the second round for another best-of-five series. 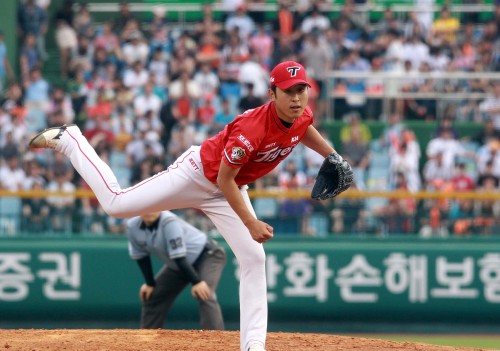 Tigers starter Yoon Suk-min won the pitching triple crown this season. (Yonhap News)
The Busan-based Lotte’s last title was way back in 1992, but this season, they finished second in the eight-team league for the first time in club history.

Expectations are already high for the Korean Series, which is set to begin on Oct. 24 in Daegu.

The regular-season champions Samsung Lions will play against the winner of the second round of the playoffs for the title.

The Lions, who lost to the Wyverns in the Korean Series last year, are looking to re-establish their old glory and win the title for the first time in five years.

The team relies on its closer Oh Seung-hawn, who notched 47 saves this season, as well as slugger Choi Hyung-woo, who belted 30 home runs.