Now, director Lee and scriptwriter Kang are looking to repeat history by returning to KBS with another ruggedly optimistic, down-on-luck drama, “Glory Jaein.”

At the drama’s press conference Wednesday, director Lee said, “It’s been a year since ‘Bread, Love and Dreams’ aired, and we thought about what kind of drama we should do this time around.”

“Well, if there is one thing I can tell you. This is a drama that is full of hope.”

Not only is this a hope-inspiring series, it is also one that boasts a prominent cast.

Like its predecessor, the two leads are struggling to eke out a happy life for themselves despite the challenges they face. 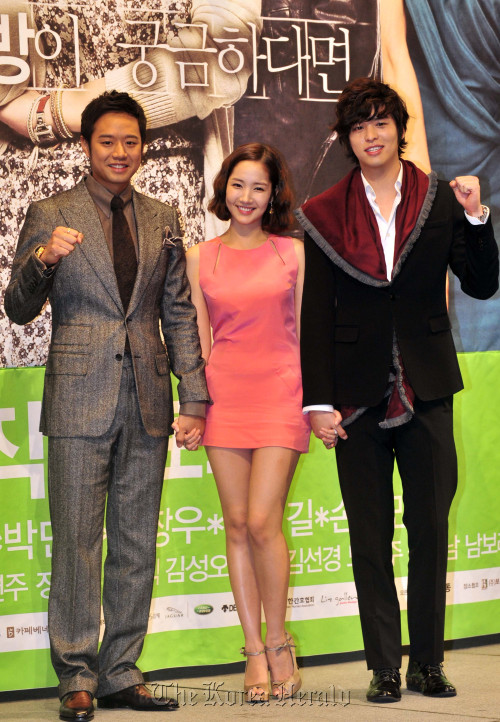 From left: Chun Jung-myung, Park Min-young and Lee Jang-woo who star in KBS’ “Glory Jaein” attend a press conference at the Imperial Palace Hotel in Seoul on Wednesday. (Kim Myung-sub/The Korea Herald)
Actor Chun, coming off his stint in MBC’s period piece “The Duo,” is going for yet another active role as baseball player Kim Young-gwang. Chun revealed that he had the honor of practicing under a famous baseball legend.

“I took on this role because there are similarities between the character of Kim Young-gwang and me,” the 30-year-old said. “For instance, when my character gets fixated on something he becomes completely absorbed by it.”

Actress Park, who recently made waves when a romantic relationship with “City Hunter” co-star Lee Min-ho hit the press, is tackling the role of nurse’s aide-and-orphan Yoon Jaein.

“My character is someone that one won’t find often in the real world because he’s a guy who thinks that everyone ranks lower than him,” Lee said of his role as a second generation chaebol. “Yeah, so I don’t see any similarities between my character and myself.”

Every villain has an Achilles heel. What is Seo’s?

“He is powerless against his father,” said Lee.

One of the trademarks of “Bread, Love and Dreams” was its loyalty to the draw of the tried-and-tested classic melodramatic love triangle, and “Glory Jaein” looks set to stick to that formula, with Kim and Seo vying for Yoon’s affections in a bitter rivalry that goes far back to their childhoods.

Like “Bread, Loves and Dreams,” Seo comes from a well-to-do family and Kim from a hardscrabble life.

While the basic structure is nothing new, the subject matter has changed.

If bread was the driving force behind the previous series, baseball is the impetus behind “Glory Jaein.”

Yet, like its predecessor, baseball is not the sole focus of the upcoming series.

“Many people ask me if this is a romance or a sports drama,” director Lee said. “Our drama touches upon everything. It touches upon family, mystery, love and baseball.”

Will the dugout prove as compelling a battlefield as the bakery?

Viewers can find out when “Glory Jaein” starts airing Oct. 12 Wednesday and Thursday nights on KBS 2 TV at 9:55 p.m.