The burly American runs Great Leap Brewing, one of a small but growing number of micro-breweries in China hoping to entice drinkers in the world’s biggest beer market with their hand-crafted lagers, ales and stouts.

Chinese drinkers buy more than 40 billion liters of beer a year, but the vast majority are consuming cheap, locally-produced lagers that cost as little as 50 cents a bottle.

Snow beer, which is brewed by SABMiller and its Chinese partner China Resources Enterprises, is the biggest selling beer in the country, followed by Tsingtao, which is made by one of China’s oldest and best known breweries.

But Setzer and other micro-breweries operating in major cities such as Beijing and Shanghai hope to attract China’s growing middle class who like the taste of foreign beer and can afford to pay 15 times the cost of a local brand.

“You’ve got 50 or 60 million beer drinkers in this country ― let’s aim at 10 percent of that and see if we can get a market going for people who want something that is a little bit better, a little bit different,” said Setzer.

Setzer, who says his beer has more “flavor” and “soul” than local brews, produces 800 liters a week for the hundreds of Chinese and expatriate drinkers who stop by his traditional courtyard for a glass of ale.

Ho Punyu, 34, is a regular at Great Leap Brewing after foreign friends introduced him to the bar’s hand-crafted ales a year ago.

“I look at things in term of value ― the taste is good, the price is right.”

At the Boxing Cat Brewery in Shanghai, where a pint of pale ale costs 45 yuan (about $7), nearly half the customers are Chinese ― which brewmaster Michael Jordan says proves there is a market for top-notch beer in China.

“The business here is in its infancy so there’s a lot of opportunity,” said Jordan, who brews 2,000 liters a week.

“It is also challenging because Chinese culture is not used to craft beer ― there’s a lot more flavor complexity.” 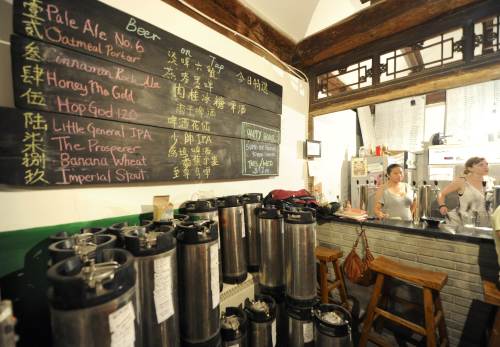 Bartenders working at the Great Leap bar in Beijing. (AFP-Yonhap News)
China has been making beer for thousands of years, according to the American Association of Wine Economists, but it is better known for its potent white liquor, called baijiu, distilled from grains such as sorghum and rice.

Beer consumption has exploded in China. The AAWE, a non-profit organization made up of economists from around the world, says the country consumes 40 billion liters a year, compared with 150,000 million liters in 1961.

But on a per capita basis, China lags far behind beer-swilling countries in Europe, with the average Chinese person consuming 24 liters a year, compared with more than 160 liters in Ireland and the Czech Republic, AAWE said.

Other estimates put Chinese per capita beer consumption at about 32 liters.

At 5-10 percent a year, the growth in China’s beer market is much slower than for wine, which is becoming the tipple of choice for those seeking to impress, said Shaun Rein, managing director of China Market Research Group in Shanghai.

“We expect red wine consumption to be growing 20-30 percent a year for the next five years minimum ― it’s one of the hottest sectors to be in right now,” Rein said.

Setzer said he is constantly experimenting with local ingredients to come up with new beer flavors to entice more customers to his rustic micro-brewery in central Beijing.

Some of his most successful creations so far are the Iron Buddha Blonde, made with oolong tea. and the Honey Ma Gold, which is made from spicy Sichuan peppercorns and organic honey.

“The Honey Ma is the 33rd attempt ... I brewed it 33 different times before I found one that I just loved,” Setzer said, as he sipped a pint of ale.

“The more you do something, the more crazy you want to be.”

Analysts say the success of micro-breweries in Shanghai and Beijing has been driven by foreign expatriates and Chinese who have lived abroad or work with Westerners, and they are unlikely to appeal to drinkers outside the major cities.

Most beer in China is sold in large bottles in restaurants, which mainly stock local brands.

“I don’t think micro-breweries will ever get hugely popular because there is a different taste and different price point and conception of what beer is,” said Rein.

“Typically Chinese like more watered down versions of beer ― it is a lot lighter in taste.”

“Beer is considered an adult refreshment rather than a serious drink in China,” Mulligan told AFP.

“You see people drinking it for breakfast.”