Ecuador’s Vice President Lenin Moreno does not let his disability hamper his ability to help others the world over.

Last week, he traveled to Korea for two days to take part in the Abilympics in Seoul, a worldwide vocational skill competition among people with disabilities.

In his role as vice president, Moreno promotes an Ecuadorian society that respects those with special needs.

“We cannot do this by ourselves; we have to work with other societies that are more advanced in reaching those objectives,” he told The Korea Herald.

The social inclusion of these different groups by providing them with opportunities for recreation and cognitive development while not discriminating based on their disabilities or special needs is vital for Moreno.

Any person with a disability will say that discrimination is an ongoing daily battle.

Moreno believes discrimination can be eradicated through knowledge and the development of science and technology.

“It is the only way we can overcome those challenges,” he said. 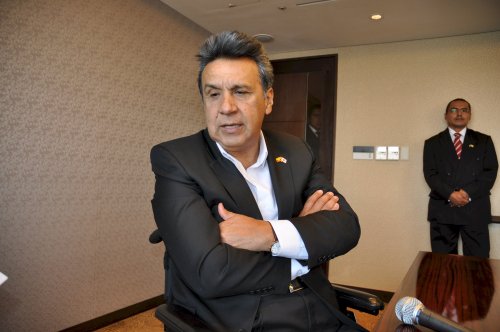 One area that Moreno works to promote is the inclusion of disabled people living in rural areas where programs are lacking compared to those in the big cities.

“This is one of my challenges and one that I am committed to, developing the services and opportunities outside of the main cities,” he said.

One program that has been going very well in Ecuador is the development of a special subsidy that is equivalent to one month’s salary, paid to the caregivers of disabled people.

“In addition, the government also provides assistance with homes, with the purchase of home appliances, and, at the same time, we provide technical training and assistance to caregivers,” he said.

He has called for Latin American leaders to find new ways to encourage social, labor, educational, and cultural inclusion of disabled people.

Those calls have hit a right note with many leaders within Ecuador and beyond because rumors are circulating to register Moreno’s name with the Nobel Prize.

While traveling the world, Moreno has found many best practices that should be shared with every country.

“In Israel I was very impressed by the incredible solidarity that Israelis have with fellow disable Israelis. In Russia I was impressed by what they have done to develop the artistic capabilities and some of the soft arts of people with disabilities,” he said.

Moreno was also impressed by Korea’s efforts in creating new spaces for people with disabilities and providing recreational and sports programs and providing an environment where disabled people can develop their skills within these special programs.

While many countries are making leaps and bounds, the linkages that bind those countries are still way off in relation to air travel.

“It’s very difficult for me to truly express what a person with a lack of mobility has to deal with, because as vice president of Ecuador, I have the right to travel in first class, but while I was a candidate for vice president, I had a chance to travel to Europe in coach,” he said.

The greatest difficulty he encountered was access to seats behind the royal curtain of first and business class.

“It was very difficult to have access to my seat and the bathroom,” he said.

“A person that has the use of their legs on a flight that’s 14 hours can stand up, walk around, but there is no flight attendant that can assist a person with a mobility issue so it makes it very uncomfortable,” he noted.

As vice president, Moreno was also in town to promote and strengthen diplomatic relations.

One area is the development of an Ecuadorian new city for the future much like the plans for Songdo in Incheon.

“This is an environment where countries like Korea, who have expressed their desire and interest to share cutting edge technology with Ecuador, can help us.”

As for the over $700 million trade deficit in Korea’s favor, Moreno believes that the number can be bridged by the development of agriculture and semi-elaborated products.

“The development of reciprocal tourism between both countries would go a long way to address that imbalance also,” he said.

Moreno was born in the Amazonian region of Ecuador; it is his home base, and the area of Ecuador he works to protect against exploitation of its natural resources.

But he knows that maintaining and not harming the environment while developing the country’s future is impossible.

“That we can reduce excess consumerism, that we can create better relationships between man and nature. I believe we should leave nature in either the same condition or better for the next generation,” Moreno said.