[ The Korea Herald – Send E-mail ]
Lion King finding his groove
By
Published : Oct 2, 2011 - 17:33
Updated : Oct 2, 2011 - 17:33
It is true to say that in soccer, the strikers are the ones who get the goals and get the headlines. Goalkeepers can play fantastically well for a full 89 minutes but one mistake at the end and all know what the Internet and newspapers will focus on.

Of the local stars who score the goals in the local league, much attention is currently coming the way of Lee Dong-gook, one of the biggest names of Korean soccer over the last decade and beyond. The reason for the acclaim is simple: He is still scoring goals and, at the moment, lots of goals. Ten in the last six games, before Monday’s match at home to Sangju, is some return.

In addition to 14 scored in the regular season so far, the Lion King has been on fire in the Asian Champions League. With the continental competition at the semifinal stage, Lee is now the leading scorer in the tournament with eight goals so far to his name. 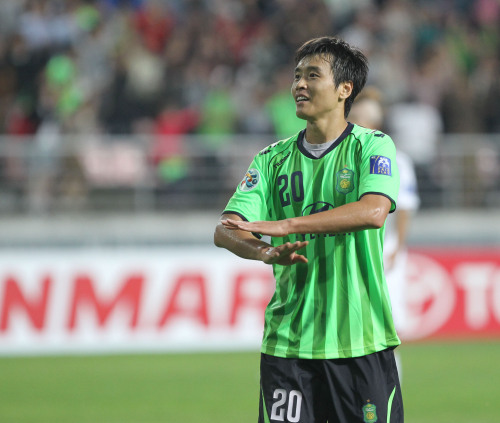 Lee Dong-gook
Incredibly, six of those came in two games against Japanese team Cerezo Osaka. The rivals met in the group stage with both games ending 1-0 to the home side. The quarterfinal was a completely different story with goals galore. The first leg in Japan ended 4-3 to Cerezo. Lee scored twice. The second leg was expected to be similarly close though perhaps not quite as exciting. It wasn’t as dramatic as the first leg as it was rather too one-sided but once again seven goals were scored. Lee managed four as Jeonbuk thrashed Cerezo 6-1.

It was one of the best nights of the player’s career and now Jeonbuk prepares for a semifinal against Al Ittihad of Saudi Arabia later this month.

It has been a long career, and in Euro eyes he will always be remembered for a season and a half in the English Premier League with Middlesbrough. It wasn’t a happy time. He arrived at the club in January 2007 and within minutes of appearing in the red shirt for the first time, he had a great opportunity to score only to fire a shot against the post. A few centimeters to the left and perhaps things would have turned out differently.

Lee never scored in the Premier League ― the most popular soccer league in the world. When his name is mentioned these days by the international media, words such as “Middlesbrough flop” or “Premier League failure” are often not far away. He returned to Korea in 2008 and after a brief and unsuccessful spell at Seongnam, he has settled well in Jeonju.

Not as fast or strong as he used to be due to injuries, especially a knee ligament problem that ruled him out of the 2006 World Cup when he was the national team’s star striker, Lee is still able to find the net when it matters and has impressively recorded more assists than any other player in the country. He could pick up the “Grand Slam” of individual prizes: MVP, Asian Champions League Top Scorer and K-League Assist King. It would be quite an achievement.

Inevitably a return to the national team was discussed following the four-goal frenzy. Lee made the 2010 World Cup squad but never made the pitch. Head coach Cho Kwang-rae tends to like younger players but has summoned Lee to the roster for Friday’s match with Poland and next Tuesday’s World Cup qualifier against UAE next Tuesday in Seoul.

His name was absent from the list when it was originally announced in Seoul last Monday but was added on Thursday as Cho said he saw the Osaka performance. “He gives us another option in attack,” said Cho.