“Almost everyone on the planet can get Arirang content if they have the right dish. But in addition to that, we want to be specifically on a platform, to be a part of a DTV package sold in the U.S.,” said Sohn Jie-ae, president and CEO of the Korea International Broadcasting Foundation, which operates Arirang TV and Arirang radio stations.

“We will probably strengthen the U.S. market to target more major cities.”

Currently, the state-run English-language station based in Seoul is available in Los Angeles, New York City, Chicago and Atlanta.

Sohn and Arirang staff recently went to Guangdong, the richest region in China, to participate in a first-ever joint live production with Guangdong TV.

Under an agreement between the Korean and Chinese TV stations, Arirang TV’s program “Showbiz Korea” will be aired on Guangdong TV for one hour every day.

“We’re going into markets with specific programs that we make so that we can fire interest in Korea,” Sohn said. 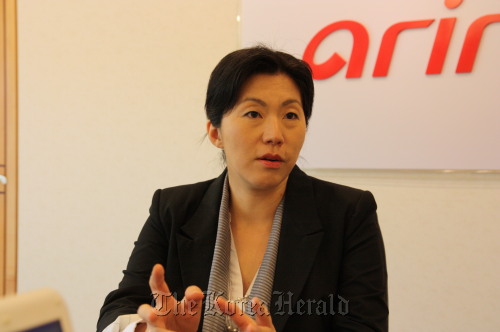 Sohn Jie-ae, president and CEO of the Korea International Broadcasting Foundation, speaks during an interview in Seoul on Friday. (Korea International Broadcasting Foundation)
The 48-year-old took office in late July, after working as a presidential secretary for overseas public relations from 2010-2011. She was spokesperson for the Presidential Committee for the G20 Seoul Summit, helping Korea successfully host the summit in November last year.

Although she has worked for the government for a year and a half, most of her career has been spent in journalism.

Sohn started her journalism career in 1985 at Business Korea, a monthly magazine, then worked as a reporter for the New York Times from 1992 to 1994, before becoming the correspondent/bureau chief of CNN in Seoul from 1995 to 2009.

Her experience in the media helps Sohn understand the inner workings of a broadcasting company and makes the learning curve quicker.

However, it is still a challenge for her to learn anew about managing personnel, budgets and strategizing, she said.

“There are a lot of things that go beyond being just a journalist. It helps but it’s still a big challenge,” Sohn said.

Currently, the annual budget for Korea International Broadcasting Foundation is 54 billion won ($45.8 million). About 30 billion won comes from state funding and the rest is covered by advertisement and income from cultural events and leasing.

“It’s always difficult (to generate income) because our audience is not as specific as a Korean-language audience. Our audience tends to be more global and it is partly why it is financially not easy for us,” Sohn said.

She made it clear that Arirang TV and KBS World have different audience targets.

While KBS World brings content from KBS, subtitles it and brings it overseas for first-generation Koreans who want to know what their Korean counterparts are watching, Arirang TV mostly makes original content for the non-Korean speaking audience.

According to an Arirang TV spokesperson, 70 percent of programming is original content.

Arirang also has a radio station, Arirang FM, which is only available on Jeju Island.

Although it has been a challenge to increase the number of listeners, new media platforms including smartphone applications and DMB channels have allowed Arirang to “overcome boundaries,” Sohn said.

About 160,000 people from 82 countries have downloaded the Arirang radio mobile app so far and half came from Korea, she said.