“Kimchi is so distinct to Korea,” Vongerichten says. “It’s the first thing people think of. It’s a great attention-grabber.”

The condiment stars in Vongerichten’s book, “The Kimchi Chronicles: Korean Cooking for an American Kitchen” (Rodale, $32.50). A self-described “staunch” traditionalist, she likes kimchi as a side dish, stirred into stews and spooned over noodles.

Perhaps not surprising given that her husband, Jean-Georges, is a chef famed for his East-West creations, the book also features recipes for a fast no-wait kimchi, a kimchi relish for hot dogs, even a cucumber kimchi martini.

Marja Vongerichten believes it’s time for kimchi to be discovered and enjoyed by more people. “I think it’s got huge potential,” she says. “People just don’t really have a knowledge of it.”

Indeed, nothing looks, tastes, feels or smells quite like kimchi, a pungent, pickled, fermented condiment that is served with nearly every Korean meal.

Made year-round, kimchi has hundreds of variations that depend on the season and the available produce, which can include cabbage, radishes, green onions and cucumbers. Many kimchi are fiery in flavor and color, thanks to the liberal application of red chili powder. It can also be stinky, but Vongerichten notes the same can be said for a number of fine French cheeses. 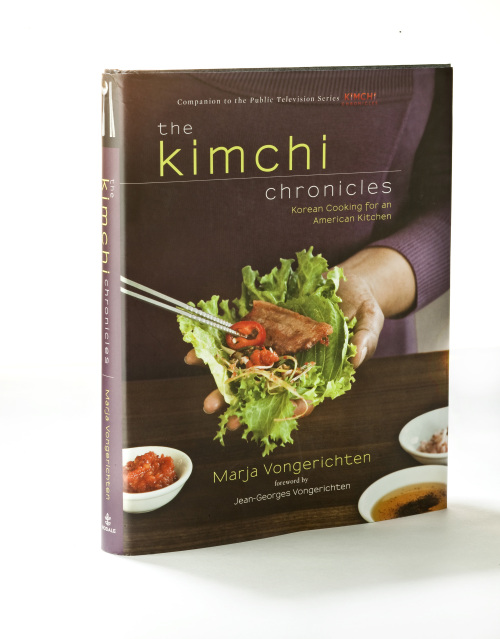 “The Kimchi Chronicles” by Marja Vongerichten (Chicago Tribune/MCT)
“Be adventurous,” she urges. “Close your eyes and eat it.”

Mark Miller, a restaurateur and cookbook author in Santa Fe, New Mexico, says the vibrantly flavored condiment feeds a hunger for “more complex flavors with less fat and salt.” He’s included kimchi in a book due out in October, “Salsas of the World,” written with Robert Quintana.

“Kimchi is becoming more mainstream,” Miller said. “The idea of fermenting things and creating more umami flavors seems to be something resonating on the American palate.” Umami is the fifth taste, a sense of savoriness.

“Korean flavors are big flavors,” he adds. “There’s a verve in those flavors resonating in the culture now.”

Making kimchi at home is “fun and completely doable,” Vongerichten says, but most Koreans buy it prepared at the market.

“When buying ready-made kimchi, make sure there’s plenty of liquid in the container,” she says. “Don’t get one that’s too dry; the liquid is an indicator of how fresh it is.”

Vongerichten encourages experimentation. Buy a number of different small containers of kimchi and discover what you like best and what you like to serve it with.

“I love to put it out with barbecue,” she says.

● Note: “One of my guilty, happy pleasures is to make this late at night (usually after a lot of karaoke) and eat it with cheese (slices of American melted into it, if you must know),” writes Marja Vongerichten in “The Kimchi Chronicles.” Using cooked, day-old rice is key to this dish.

Heat the oil in a skillet over medium-high heat. Add the onions and salt. Cook, stirring occasionally, until the onions begin to soften and brown, about 3 minutes. Add the kimchi and kimchi liquid; cook, 1 minute. Add the rice; stir to combine. Cook until the rice is warmed through and beginning to brown, about 5 minutes.