The three-time Grammy winner described Thursday how he has been working with Olympic hopefuls from five countries to create a soundtrack for the London 2012 Games ― an anthem that fuses sounds from training with the beat of music.

Ronson, who worked with the late singer Amy Winehouse, recorded athletes as they trained, sometimes attaching microphones to legs, chests and arms. He also placed them on running tracks and archery targets ― often getting sound not possible during the games because they would interfere with competition.

He recorded the bounce of a table tennis ball and the thwack of an arrow being released from an archer’s bow.

Britain’s Darius Knight, a 21-year-old table tennis player, hid his face behind his hands as Ronson told reporters that the athlete’s “very unusual grunt” will be immortalized.

“Darius has this very unusual sound. It is great,” Ronson said. “Sometimes he uses it to put off his opponents, and sometimes it is a sound of victory ― to me it sounded like James Brown, so I knew I would use that.” 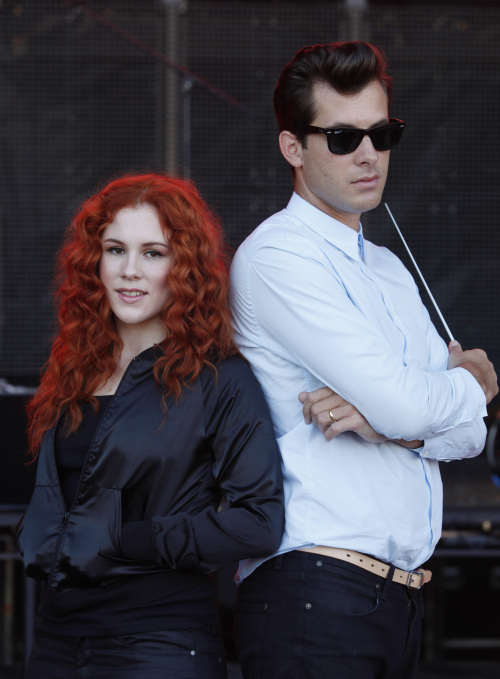 British music producer Mark Ronson (right) and singer-songwriter Katy B pose in East London, Thursday. (AP-Yonhap News)
Ronson attached a microphone to the chest of 24-year-old Kseniya Vdovina, a 400-meter runner from Russia, catching her heartbeat. He also wanted to record her panting as she doubled over, having given it her all.

“I knew the breath was going to be an important sound,” he said. “The emotion I felt after hearing like that ― I wanted to put that in a track.”

He loved the “eyyyaaahhh” screech of 23-year-old Mexican taekwondo star Maria Espinoza. He said he was enamored with “the screams and the grunts that she made when she was kicking the crap out of somebody.”

Working closely with the athletes in their home countries gave him a sense of a deep responsibility to them, Ronson said.

“It makes you want to make it better,” he said.

He recounted traveling to Singapore to meet with Dayyan Jaffar, an 18-year-old archer who dreams of representing his country during the 2016 Olympics in Rio de Janeiro. Ronson promised him that he would give him a star moment ― when all the music stops and you see the arrow fly from the bow. Only later did he worry that he had promised too much.

“Halfway through it, I’m panicking. I thought, ‘What am I talking about? Why am I promising ... a full star moment? I don’t know if it is going to work,’” he said. “But then I went back. I had this obligation to pull it out.”

Jaffar, for his part, can’t quite believe that Ronson figured out how to capture the sound of archery. He also can’t believe his good fortune to have been included in the whole project and wants to ensure he does everything he can to make it perfect.

Ronson said he also felt immense pressure on the project because it is different from creating an album in which a track or two can be discarded if deemed subpar.

The song will provide the soundtrack for commercials, digital platforms and events during the games ― part of sponsor Coca-Cola’s global “Move to the Beat” campaign.

Ronson next travels to the U.S. to record his final athlete, 29-year-old David Oliver, a 110-meter hurdler from Denver.

Oliver said he’s ready for this, and speculates that the way his spikes click when leaving the blocks might make a cool sound. But he has no clue what Ronson has in mind.

“That’s the most interesting thing,” Oliver said. “You really have no idea.”