The blare of delivery trucks’ loudspeakers, the tinny resonance of a bow struck against a metal lunchbox, the frenzy of yapping dogs ― these are some of the Korean sounds woven into music in Seoul Milk.

Produced by multi-instrumentalist, composer and multimedia artist Alfred 23 Harth, or A23H, (the number was adopted when signing autographs in the ’80s), the city’s constant cacophony is not white noise, it is inspiration.

Hailing from Kronberg, close to Frankfurt am Main, Germany, and gaining his art teacher diploma at the J.W.v.Goethe University there, Harth is a renowned avant-garde musician and artist.

He is most known here for his Mother of Pearl series of CDs, the artist’s ode to Korea and an exploration of its politics and culture.

Harth and his wife, Korean artist Yi Soon-joo, came here in 2000 from Frankfurt for her to exhibit at the Gwangju Biennale.

Initially, they had planned on moving to New York afterward, but feeling that it would not be the same after 9/11, which happened shortly after they first visited Korea together, they took up a six-month artist’s grant and moved here for good in 2001.

They have embraced the opportunities that Korea has offered. Yi has been able to reconnect with her native country and Harth enjoys soaking up Korea’s rich stimulus in his work. 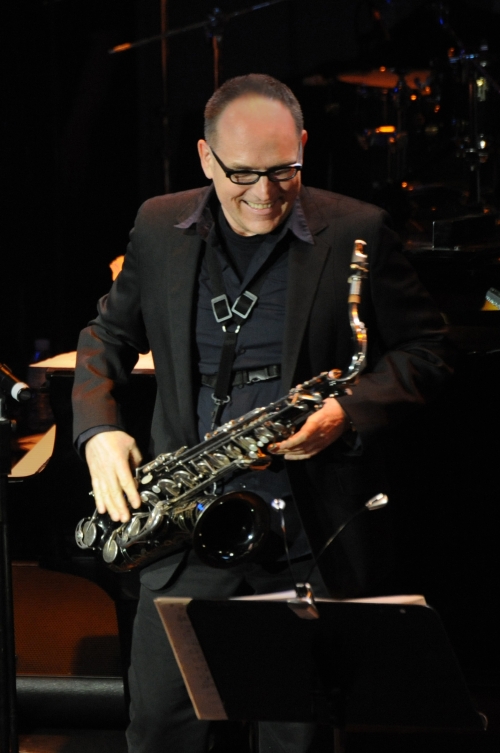 Harth performs for Choi Sun-bae’s “A Trumpet in the Night Sky” show at Jazz Park, Seoul, May 2011. (Kim Nyung-man)
“I fell in love with this country,” said Harth, “Lovely people, lovely place.”

“For both of us it was a huge thing ... somehow we’re grounded here,” explained Harth to The Korea Herald over tea at an elegant European-style cafe in Hongdae, Seoul.

The wonder of being a foreigner in a new land is a very special experience, said Harth. He remains particularly grateful for the chances it has brought for him to play with some of Asia’s most highly regarded improvisers and musicians.

When he arrived, many in the art world already knew of him ― he was famed for work including a 13-year collaboration with fellow German composer Heiner Goebbels and for his direction of musical West Side Story in Frankfurt. He had a whole new set of artists to meet, and delighted in immersing himself in the scene and its many parties.

His first concerts included work with alto saxophone maestro Kang Tae-hwan and pianist Park Chang-soo ― both of which he has continued to work with.

He spoke highly of Park, for whom he contributed to the ongoing House Concert book series documenting hundreds of musical performances: “He is a very honorable artist.”

His latest work with the pianist in August explored music for silent movies in “Sumurun” at Kumho Art Hall.

He sensed an excitement building, and as he and his wife had been offered an art grant at the now defunct Ssamzie Space in Seoul, starting September 2001, he felt he was in the right place.

“I had the impression that there was something happening that hadn’t happened before ... a kind of synchronicity. This was in the circles that popped up for instance,” he said, adding that he was involved with many of these groups.

After about four years playing, recording and mixing in the Korean art community, life became more “normalized” for Harth. But although he has since expanded his reach outside, Harth remains fascinated by his adopted home.

“It’s like being an archeologist on an expedition, it’s more adventurous.” 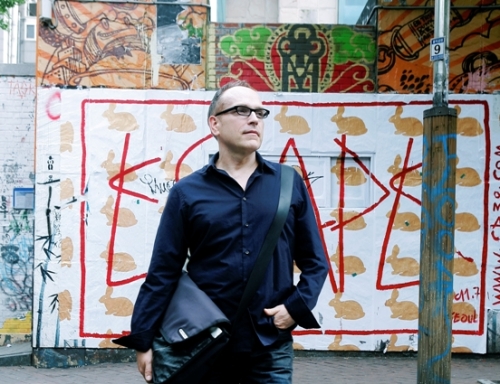 Alfred 23 Harth (Na Seung)
Harth, who is also a performance artist, is keen to avoid being pigeonholed and does not restrict himself to a genre: “It’s very hard to describe (musical style) because it’s so many different styles.”

His music, while obscure and wildly eclectic, is laden with a depth of meaning and an attention to detail which is carried through to the intricate design of the CD sleeve notes.

He said his sound has changed since he’s been in Korea, “This was part of the idea ― to jump into other dimensions of life and let the flow take me away.”

As a saxophonist with roots in jazz ― one of Harth’s favorite Korean venues to play is Club Evans in Hongdae ― he has also taken on aspects of traditional Korean music, as well as the day-to-day sounds of the country. The latter through his work as a sound researcher, which adds to his wealth of musical knowledge, displayed in numerous releases, performances and articles.

“I’ve never counted (how many instruments I play). So many I play in a more freestyle way, for composing and doing recordings.”

His 2003-06 Mother of Pearl series consists of five vastly different CDs ― NUN, T_error, eShip sum, nu:clear re:actor and Seoul Milk ― which all have the common thread of Korea and an ornately decorated mother of pearl case running through them.

The idea came about whilst he was setting up his studio space at Imjingak near the North Korean border ― the political situation between North and South being of great interest to him.

“I chose mother of pearl because when I came here ... I found this beautiful Korean furniture, and this mother of pearl tradition. I’ve liked it for many years because my saxophone keys have it,” he said.

He worked with the “trumpet hero” of Korea and long-time friend and collaborator Choi Sun-bae on the project.

“It’s even on the musical instruments so that’s very nice having this connection between our instruments and this old tradition which is mostly bound to furniture.”

Although Harth still plays in Korea, in recent years he has spent more of his time concentrating on his work abroad.

In 2004 he began playing a lot in Japan where he feels proud to have been perhaps the only steady foreign player in Japanese ensembles, having entered the scene via his friend, composer Otomo Yoshihide. He is now enjoying performing in other places in Asia, most recently in China with the Shanghai Quintet.

He is also experimenting working with other Western artists and in 2009 formed the duo Gift Fig with American composer Carl Stone who lives in Japan. Since 2007 he has also formed German trio Taste Tribes and the Italian four-piece 7k Oaks.

Notes from the past

Mother of pearl is not the only historical aspect of Korea Harth appreciates.

“All of those beautiful items from history, also in architecture ― the combination between harmony and nature is so contrary to today’s behavior and architecture.

“Apartments are a contradiction to the old spirit, so this is about convenience. I think Koreans are very fond of convenience in general. I think convenience is nice but it has its prices,” he explained.

His wife, a lecturer as well as artist, has been teaching a series of history workshops which he said highlight the fluid nature of Korean history and the fact that it is still being remembered.

“It’s still going on. And I think it should move. Because of the Japanese occupation, because they stigmatized Korea very much. But if you scratch under this surface then you will find beautiful things that are not known to us.”

There are elements of modern Korea that Harth has difficulty with.

He will not play golf, a popular hobby among Koreans, because of its ecological impact, instead preferring to swim in the East Sea.

He feels especially strongly about the government’s Four Rivers project. Germany’s past experience with a similar endeavor should prohibit the development, he believes.

“All kinds of catastrophes started to happen because of this kind of control. So they started over and said lets change it back like it was before. So now since we have this kind of experience, why is Korea making the same mistakes? We (Harth and his wife) don’t understand. We simply can’t follow the ‘green’ aspect. For us it seems pointless, just a color not an opinion.”

Being in Korea has helped Harth find a spiritual balance in his life which he prizes above all other achievements.

“I’m a believer,” he said, “My biggest aim in life is the development of soul.”

“My tendency is also toward Buddhism so it’s very good for me to be here,” he said, explaining how he loves to get out into the countryside and explore Korea’s temples.

He has also added another instrument to his repertoire here and learned to play the double reed, flute-like taepyeongso.

“Being in touch with great people, and the living aspects (of Korean culture) like shamanism made me want to play a traditional instrument.”

But despite his spirituality, don’t expect to find peace in Harth’s music.

“It doesn’t sound New Age. It is quite weird and experimental. I like peaceful music, but to be true to myself, it’s not my plate to do New Age stuff.

“If you’re a seeker, if you have a quest, the best thing is to be truthful to yourself and then you end up doing what is supposed to be your plan,” he explained.

Although Harth said he had never before put his music in the context of his spirituality, he believes that Korea is a good place for him to make that connection.

“I really can say that living here in the Far East ― with the ambience of the philosophy, Confucianism, and everything that made people here what they are today coming from thousands of years ― (makes me) many times envy that they don’t have to think about being quiet and composed, because they have it from the beginning,” he said.

● 2005 ― Composition “iGnorance” for a Yun Isang memorial concert in Seoul