Beginning to heal following the horrors of abuse or, worse, sexual slavery may seem an insurmountable task.

But Soyon Thompson has been helping a handful of Nepali women confront this challenge through a new art course in Kathmandu.

Her group of eight students has spent the last four months mixing colors to paint birds and people, and breaking mosaic tiles ― all the time smashing through taboos to talk about women’s rights and their own experiences of abuse.

An estimated 12,000 women are trafficked each year from their homes in and around the Himalayas, mainly to India.

The Korean charity worker has taken a first step toward aiding some of the vulnerable women remaining in or returning to Nepal’s remote mountain communities after moving there herself in December.

The Korea-born 28-year-old, who grew up in Nigeria and studied in America before returning here to teach English, decided to move to Kathmandu long-term after visiting for charity work with the Mountain Child organization.

The charity was founded in 2000 by Jack Reid when the small team trekking through the Himalayas stumbled across a group of young children being escorted out of the mountains.

The men confirmed the group’s worst fears, openly admitting that the children were being taken to be sold into the sex trade industry in South Asia.

“That’s when we started crying,” the pastor who spends his time between America and Korea recalls on the Mountain Child website.

“We are still crying. But a few of us, decided to band together and to turn the tears into tactics. We started getting organized, started making plans about how a small group of people could make a big impact.”

The Christian charity now runs expeditions to map out remote regions throughout the Himalayas. The 2,500 kilometer-long and 400 kilometer-wide mountain range has a population exceeding 11 million but is crossed by only three drivable roads. This means many tribes live seven to 20 days walk from the nearest road.

Thompson and her Canadian husband, John, are helping to maintain the charity’s R.A.N.C.H. headquarters which hosts volunteer groups and is also a home for vulnerable Himalayan mountain children.

Thompson, who studied psychology and enjoyed art as a hobby up until now, recruited participants for her weekly art group through local trafficking victim support networks.

Though she is learning Nepali, she communicated with participants in her first art therapy-style project from June through a translator to show how creating art can be a healing process. The first session’s participants included one woman rescued from sex work in India, Nepali women’s aid workers, and others with their own stories of abuse. 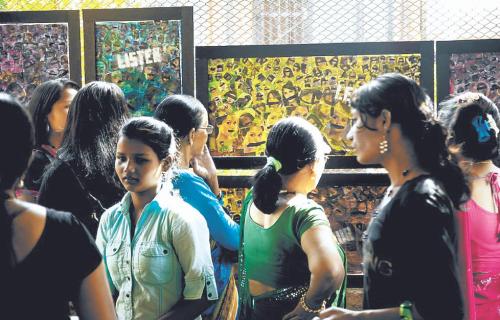 Women attend a show of paintings created in therapeutic art classes in Kathmandu, Nepal. (Soyon Thompson)
The hands-on classes focused on topics such as the importance of having a voice and being able to speak up for one’s own rights, with one project encouraging women to paint over the mouths or eyes of faces they had torn from magazines.

“I wanted them to see that some people were voiceless; they cannot speak out. Then, there are other people who don’t really see the injustices that are happening right in front of them,” Thompson explained.

“They don’t hear and they don’t listen to what these women and children are saying.”

Following a colorful exhibition of their artworks at R.A.N.C.H., Thompson is preparing to start a second session in January.

“Before, we did more of the preventative approach through the children’s home. We wanted to branch out a little but more from an artistic background.

“I wanted to use art to address recovery. It is not quite art therapy as that is a very specific field, but I am trying to figure out things as I go and use the little psychology background I have and reach out to the trafficked women.”

While the most recent available figures from the International Labour Organization in 2001 estimate that around 12,000 Nepalese girls were trafficked each year to India for prostitution, the annual figure for trafficked women reported by Nepali police is below 200.

The U.S. State Department has reported that Nepalis are subjected to sex trafficking and forced labor in their home country, India and the Middle East, but also to some degree in other Asian destinations, including Malaysia, Hong Kong and South Korea. It said that the Nepali government was working to tackle the country’s trafficking problem with limited resources, but more still needed to be done.

At a grassroots level, women taking part said Thompson’s first session helped them find ways to forgive themselves and others in order to let go of past hurts and move on.

“This time was more for the support workers. It was not the exact population I first had in mind but it still turned out well as a first time experience,” Thompson said.

“Some of the women have their own stories of different kinds of trauma and abuse that they have experienced. There is not a clear line all the time, some are at rescue centers in order to prevent them going into trafficking or being sold.

“The future of this project won’t just necessarily be trafficking victims but a wider range of women. The target is recovery from different kinds of injustices.”