Musicians from two cities on opposite sides of the globe started to pluck strings and breathe into their Asian musical instruments at the same time on Monday morning, 10 a.m. to be exact, Seoul time.

With some stationed in New York and some in Ansan, Gyeonggi Province, the musicians slowly led the audience into an imaginary walk through a bamboo forest with the meditative tune created by their Japanese and Korean traditional musical instruments. What enabled the space and time-transcending performance was the Internet and video cams. The “Telepresence Concert” was co-hosted by Seoul Institute of the Arts in Ansan and LaMaMA E.T.C. in New York. 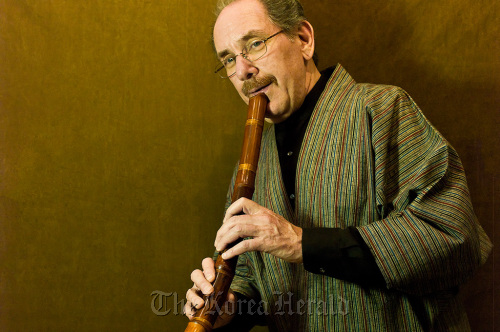 Shakuhachi (Japanese bamboo flute) musician Ralph Samuelson
As the title suggests, the concert crossed many borders ― not just between countries but also between music genres and time. The contrast between traditional music and dance and high-technology equipment was an impressive and rare sight.

While agreeing that the concert was the ultimate, most cutting-edge cultural exchange that could be offered today, Samuelson added that it was not a substitute for the real thing.

“There is no substitute for the face-to-face, person-to-person exchanges but this is the next best thing,” said the U.S. musician after the concert.

Samuelson has always been interested in Asian culture, and when he accidently came across shakuhachi while attending Wesleyan University as a graduate student, he immediately fell in love with it. He learned the instrument in Japan for many years from distinguished musicians like Yamaguchi Goro and Fumio Koizumi, and eventually became one of today’s best shakuhachi musicians.

He also worked at the Asian Cultural Council for 32 years, from 1991 to 2008 as the director, and is currently serving as a senior advisor. ACC, also known as the John D. Rockefeller 3rd Foundation after the founder, supports cultural exchange in the arts and humanities between the U.S. and Asian countries.

More than 150 Korean artists including renowned video artist Paik Nam-june, dancer Hong Sin-cha and painter Kim Whan-ki have received support from ACC since its establishment in 1963. The council is currently searching for ways to link partnerships with local donors so that it can offer more chances for the many talented artists here. Such a system has already taken root in Taiwan, Hong Kong, China and the Philippines.

“If you leave your home and move into a different cultural environment, you learn so many new things. Your mind opens up and expands. It is very helpful with the work you do, the community you live in, and the country you live in. It makes you a better person because you get to know more than one way to think,” said Samuelson. 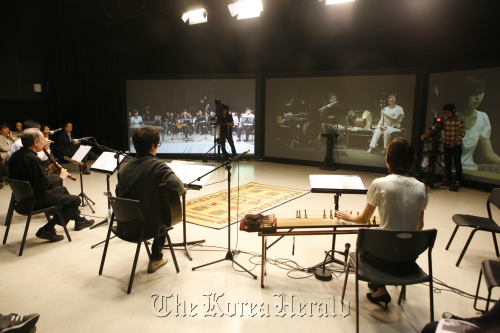 Monday’s concert sometimes showed some technical problems like distortion of images and sounds depending on the internet traffic, but they were not too disturbing.

The highlight of the show was the final session when all artists in both cities passionately joined in performing two Korean traditional tunes “Gwiso” and “Milyang Arirang.” It was an ensemble of musical instruments from at least three different origins ― two guitars joined in as well ― but created a harmony as if they were from one.

“Just as how the audience can feel that what they heard was meditative music although they do not have professional knowledge, musicians can easily connect to each other with a certain feeling despite their nationalities and use of different instruments,” said Kim Young-dong, professor and daegeum player who participated in the concert.