“I think perception of Ford here is that we make big cars and gas-guzzling vehicles. But we have 14 cars with our leading ‘Ecoboost’ technology, we will introduce more and change such perceptions,” Frick told The Korea Herald on Friday. 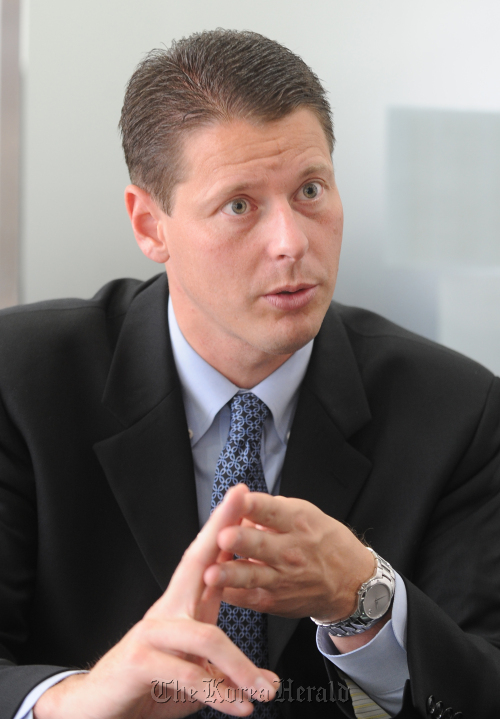 Andrew Frick
Ecoboost engines are unique to Ford vehicles and offer up to 20 percent better fuel economy than the majority of gasoline-powered engines without sacrificing power.

In Seoul to lead marketing of the all-new Ford Focus, the brand’s flagship compact car released last week, the sales expert emphasized that Ford’s two largest segments in Korea are small compacts and mid-sized CD platforms. It is downsizing engines. Ford in May launched Explorer SUV with a 3,500 cc engine and plans to bring in a 2,000 cc Ecoboost engine before the end of the year.

“We’re going to position a lot better with more investments in Korea. This year will be a good stabilizing year for us, we expect to see continued growth as we did last year,” he added.

Creative marketing is at the core of its image revamp strategy. Ford brought its global rally program to Seoul, which involves pairing six volunteers with a celebrity each for an all-day road rally. The six-team race, which took place on Thursday, involved completing various missions as they drove around the city to win a 2012 Ford Focus. 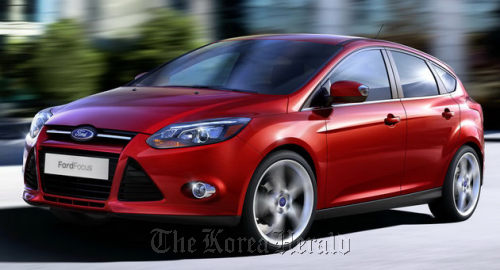 The all-new Ford Focus
The six participants were selected from Ford’s Facebook page and its me2day channel.

The “Focus Challenge” was designed to showcase the model’s dynamic driving performance and smart technology to the six participants active on social networking sites. Videos and pictures from the rally will be available online.

“Marketing is important to overcome some of the perceptions. Korea is a very competitive market and we’re going to do some non-traditional marketing activities outside newspapers and general media,” Frick said.

The all-new Ford Focus, available in hatchback and sedan, targets young drivers with its edgy style and updated interior. It has fuel efficiency of 13.5 kph and 6-speed manual transmission with a 2.0 liter engine. The latest compact model boasts smart technologies, including an indoor Wi-Fi capability, customized ambient lighting and all-electric parking assist system that parks the car itself using built-in sensors.