South Korea must pursue a safe, gradual reunification with North Korea in a process where the reclusive regime will feel enough time and room for change, the new chief of Seoul’s state-run think tank on unification said.

“As a regime of many contradictions, North Korea will collapse some day. What we must do is to make the utmost effort in having the regime come down slowly, rather than suddenly,” Kim Tae-woo, president of the Korea Institute for National Unification told The Korea Herald.

“The North Korean leadership will not adapt to any changes should it feel threatened or rushed in any way.”

The appointment of Kim, who formerly served as vice chief of Seoul’s institute for defense analyses, came amid persisting tensions on the divided peninsula after Pyongyang conducted two deadly naval attacks against Seoul last year.

As government-level dialogue remained suspended for months between the two rivals, some soft-liners here raised doubts about a right wing defense and nuclear weapons expert leading the institute designed to prepare for a peaceful reunification with the North.

Kim, who officially took office on Aug. 7, downplayed such concerns, stressing the need of for a two-track approach to North Korea.

“While we must never give up cooperating with the North as a unification partner, we must also maintain full alert against its military threats,” said Kim

“Unification and defense have never been two separate issues.”

The chief nuclear envoys of the two Koreas held a second round of talks in Beijing this week, continuing efforts to bridge differences over how to resume the suspended regional nuclear disarmament talks.

Partners of the six-nation denuclearization talks have been making efforts to persuade Pyongyang to take the necessary steps before resuming the long-stalled negotiations. The talks, involving the two Koreas, the U.S., China, Japan and Russia, have been stalled since the end of 2008.

Although North Korea has promised a moratorium on nuclear testing and missile launches, one of the main conditions the partners have been demanding, Washington wants the communist state to address concerns about its uranium enrichment program.

“While we are obviously the key partner in nuclear talks, this is an international issue that goes far beyond the two Koreas. Our demand on North Korea is not so important here as it should be in the inter-Korean dialogue,” Kim said. 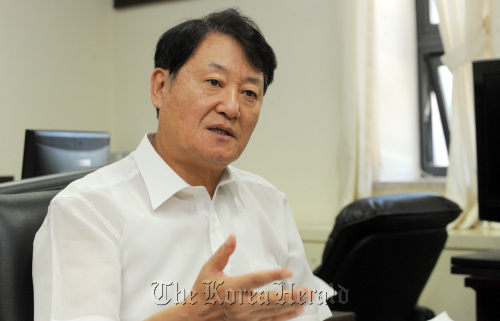 Kim Tae-woo, president of the Korea Institute for National Unification, speaks in a recent interview with The Korea Herald at his office in Seoul. (Ahn hoon/The Korea Herald)
Kim, however, warned of rash optimism over the six-party denuclearization talks.

“Too much optimism will lead to disappointment,” he said. “We must think of the six-party dialogue as a weak, light method to keep in check North Korea.”

“The North Korean regime itself is a dilemma. It cannot give up its nuclear weapons without giving up the whole regime. Therefore, the six-party talks will not suddenly lead to a miraculous process,” Kim added.

Kim, who will hold the post through August 2014, said he wanted to help the government exercise more flexibility in holding dialogue and making up with Pyongyang.

“It is important for us to maintain a stable posture on the basic terms North Korea must meet in order to talk to us. At the same time, there’s more room for flexibility in the fields of scholastic exchanges, cross-border tours and so on,” he said.

Kim also said the current South Korean administration was not so “hard line” on North Korea as long as the communist neighbor complies with the basic conditions.

“We want to see progress in denuclearization, have the safety of our people in North Korea guaranteed, stick to global standards in economic exchanges and have North Korea transparently disclose how donated food is distributed among its people. When these conditions are fulfilled, the government is willing to give even more than its predecessors,” he said.

Kim also expressed his ambition to expand research and discussions about reunification strategies, costs and preparations for post-reunification.

“The society has long considered reunification strategy as a taboo subject, but it is time for us to open up about this issue,” he said. “I believe a gradual mutual assimilation of the two Koreas is the best way and hope to promote this method.”

The chief of unification institute emphasized that the reunification of the two Koreas has a value that “goes far beyond money and convenience.”

“Think about it this way: seven decades of division is only a brief, temporary situation when seen from the perspective of the Korean Peninsula’s long history as one nation. What more reason do we need in reunifying?”