The 24-person delegation, including the seven leaders, flew to Pyongyang via China’s Shenyang. It plans to stay there until Saturday. The trip was organized at the invitation of the North’s Korean Council of Religionists.

“We will deliver South Korean religious groups’ aspirations for peace to the North,” they said in a joint statement read by Archbishop of Gwangju Hyginus Kim Hee-joong at Incheon International Airport.

“As the religious people from the two Koreas gather to reaffirm our resolve to achieve peace, we hope that the minds of the two Koreas will become united in our pursuit of reunification, and that this will contribute to opening a new history of reconciliation, cooperation and exchange.” 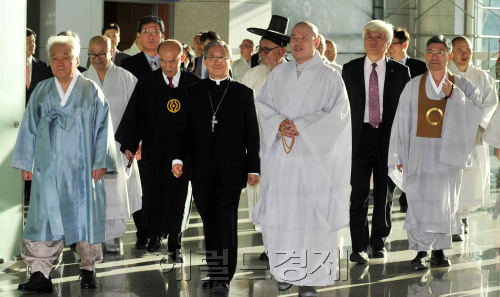 Leaders of South Korea’s seven religious orders depart for North Korea at Incheon International Airport on Wednesday. (Kim Myung-sub/The Korea Herald)
The delegation also expressed thanks to the Seoul government for the permission to visit the communist state.

“We thank the government for cooperation. As each little effort is to make significant history, we sincerely hope that people pay more attention (to our efforts) to yield a beautiful outcome. We call for your prayer,” he said.

During their stay in the North, they will meet with North Korean religious leaders for joint prayer meetings and other religious events slated to be held in Pyongyang and Mount Baekdu.

On Thursday, they are to visit religious facilities and participate in a religious convention on reconciliation, unity and peaceful reunification. On Friday, there is to be a prayer meeting at Mount Baekdu and a farewell dinner for them.