After Dillon Jones’ first Chuseok, there was nowhere to go but up.

It was September 2003, and he had just arrived in Seoul from the U.S. about a month earlier. He knew a traditional holiday was coming; for one thing, his Korean-American roommate had left to spend it with his family.

Not having any plans, though, Jones only realized on that day that his employer’s cafeteria would be closed, along with the rest of the restaurants in the area. These days, he refers to that first year’s experience as an “involuntary fast.”

Jones spent his time in their apartment which, lacking cable, only had a pair of Korean-language channels.

“I basically watched those channels even though I didn’t understand anything,” he said. 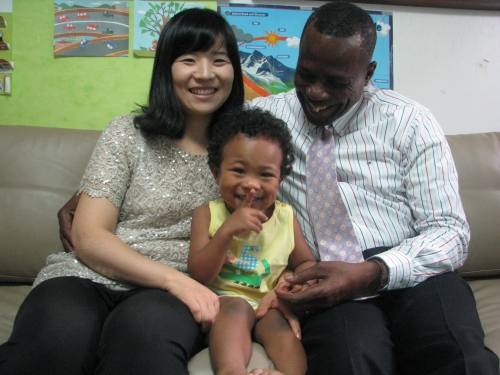 Jeong In-sun, Dillon Jones and their son Sunon Daniel Jones travel from Seoul to Gwangju for Chuseok every year to be with Jeong’s family. (Rob York/The Korea Herald)
However, those on the screen were in full traditional garb and were participating in events related to the holiday, so “it gave me a sense of what Chuseok is about,” he said.

The next year it got better, though, as a Korean family invited him and some of his co-workers to spend the holiday with them. Over the next year, he would meet Jeong In-sun, who in 2006 would become his wife.

Since their marriage they have spent the holidays with her family, braving the holiday traffic between Seoul and Gwangju each year.

“It’s a lot of food and a lot of sleep,” he said of celebrating the holiday with his new family. “Which is perhaps different from the United States. There you eat and watch (the Dallas Cowboys) play somebody.”

In 2009 Jones and Jeong’s son, Sunon Daniel Jones, was born, making each Chuseok since quite a bit more active. But for both of them, used to working over the holidays to finish projects and supplement their income, it’s a welcome reprieve. Furthermore, Jones said his new family has never made him feel anything but welcome

“I’m sure they recognize that I’m different, but it’s great to be accepted into the family,” he said. 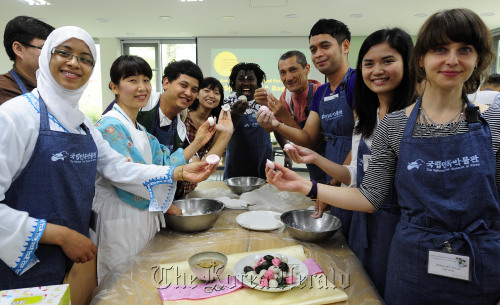 There are many types of expatriates in Korea, of which the long-term resident who has started a family, like Jones, is but one. And there are about as many ways of spending Chuseok in Korea as there are foreigners in Korea. Suzanne Mattern, who has been here 18 months, will be spending it with her mother Maria, who is traveling here for the first time.

“Of course, an afternoon touring Gyeongbokgung is necessary along with the Hangul Museum underneath King Sejong’s statue (near) City Hall,” she said. “While in that area we will eat traditional samgyetang. We will take the USO trip to the DMZ along with a day at the Seoul Museum of Modern Art.

“There are so many great attractions and activities to experience while in Korea,” she said. “I hope that my mom gets to see how much Korea has progressed in such a short amount of time.”

Even more numerous than English teachers in Korea are migrant workers, most of whom arrive from other nations in Asia. Some places, such as the Gwangju International Center in South Jeolla Province, have already hosted Chuseok events welcoming them.

In some cases, the larger community that those workers belong to takes advantage of the time off to host events. Over the past seven years, one example of this has been the Indonesian community. An employee at the Indonesian Embassy said that about 1,500-2,000 Indonesian nationals are expected to gather in the cities of Uijeongbu, Gyeonggi Province, and Busan on Sept. 11-12.

There they will hear a speech from popular religious figures on good citizenship.

“As part of our duty in educating and protecting our nationals abroad, we want the Indonesian people here to have good conduct and respect the law,” she said.

“So, usually, together with our community we invited a quite famous religious lecturer from Indonesia to give a motivational speech at the event.”

For those who have not made plans with communities, families or friends and don’t want to be stuck at home, there is a wide variety of events to choose from across the country.

The Tourist Information Center of the Korea Tourism Organization began hosting events for Chuseok on Sept. 7 and will continue through Sept. 17. Between the hours of 9 a.m.-8 p.m. visitors can play traditional games and try on hanbok until Sept. 13. From Sept. 14-17 visitors can also take part in those activities, as well as trying their hand at Korean calligraphy from 1-5 p.m. The center is located near Cheongyecheon Stream and can be accessed from Jonggak Station Ex. 5, Euljiro 1-ga Station Ex. 2 or Gwanghwamun Station Exit 5.

More information on this and other events can be the KTO’s website, english.visitkorea.or.kr or.

The KTO also recommends the Korean Folk Village in Yongin, Gyeonggi Province, which hosts Chuseok events from 11 a.m.-5 p.m. on Sept. 10-13. Events will include traditional cultural performances such as martial arts and a wedding ceremony, Chuseok customs such as making rice cakes, plus folk games and crafts. For more information, including directions, visit http://www.koreanfolk.co.kr/folk/english/index.htm or call (031) 288-0000.

Those in the Seoul area looking for something a bit different, such as learning to take better pictures, can spend some time over the holidays learning from experienced photographer Michael Hurt at Studio 11, located at Trapalace Building A, Suite 1704. An intensive beginner class starts Saturday at noon, with another on Sunday at 4 p.m. and a course on advance mixed lighting with flash starts Sunday at 6 p.m. Hurt’s photography has been featured by The Korea Herald, Lufthansa and CNN.

The course fee is 200,000 won for the beginner’s courses. The lighting course will be 100,000 won and limited to six participants. Search “Photography Classes in Seoul @ Studio 11” for more information.

In South Chungcheong Province, the Daejeon International Community Center will be hosting the 2011 Chuseok Holiday Event in Daejeon for Global Friends at Kumdori Land on Sept. 13.

The event will run from 11 a.m.-6 p.m. and include men’s and women’s contests in arm wrestling and Ssireum, Korean traditional wresting, both of which will include cash prizes. Prizes will also be available at the talent show to take place that afternoon. Search “2011 Chuseok Holiday Event in Daejeon for global friends” for more information.

Outside of Seoul, places open for Chuseok and offering events over the holiday include the Jeonju Hanok Village, as well as the national museums of Jeonju, Gwangju and Gyeongju.

In addition to the KTO site, comprehensive lists of places to visit all over Korea, such as the Namsangol Hanok Village, amusement parks, and the nation’s many palaces and museums, can be found at sites such as Korea4Expats.com and Korea.net.