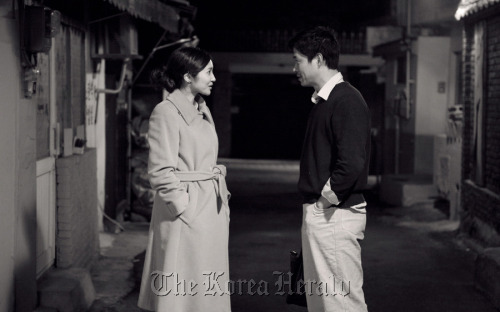 The film was the opener for the 5th Cinema Digital Seoul Film Festival (CinDi) in Seoul last month, and premiered in May in the Un Certain Regard section of the 64th Cannes Film Festival. Hong received the top prize at Cannes last year in the same section with “HaHaHa.”

The largest public film event in the U.K, the London Film Festival features some 300 feature films, documentaries, animations, and shorts from around the world every year. “The Day He Arrives” has been invited to this year’s World Cinema section. The festival will be held in London from Oct. 12 to 27.

Shot in black and white, “The Day He Arrives” tells a story of a has-been filmmaker’s visit to Seoul during the winter season. He drinks and dines, visits his old girlfriend, and falls for a pretty bar owner who strikingly resembles his ex. The simply plotted film exhibits Hong’s signature repetition variation techniques, leaving many interpretations up to the viewer.