The ranking is calculated based on the top 225 companies’ revenues from overseas contracts.

The 11 builders include Hyundai Engineering & Construction Co., which stood at 23rd, and Samsung Engineering Co. at 34th. 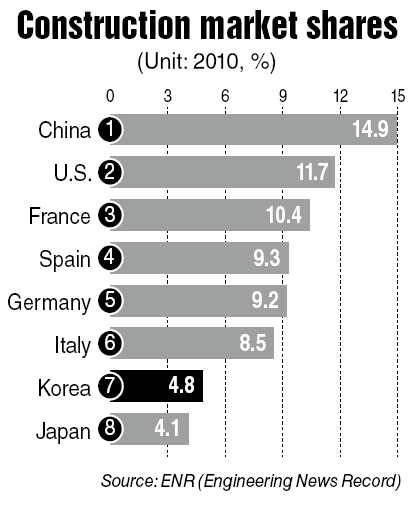 China was the largest country with a share of 14.9 percent, followed by the United States with 11.7 percent, said the KFCC.

The KFCC said that South Korean builders’ high position in the global market is attributable to their success in the Middle East.

They won 15.4 percent of the construction projects in the oil-rich region, following the U.S. with a leading 16.2 percent.

In contrast, South Korea was behind in other big economic blocs such as Europe, Asia and Africa, while Chinese contractors dominated those markets, said the KFCC.

“Asian and African countries are increasingly becoming important in terms of development and resources,” said an official at the KFCC. “South Korean builders should tap into these regions to diversify their markets.”