[ The Korea Herald – Send E-mail ]
Can electric cars win in the mass market?
By
Published : Sep 4, 2011 - 19:21
Updated : Sep 4, 2011 - 19:21
CHICAGO (AFP) ― It’s not every day that a U.S. governor accepts an invitation to the launch of a Japanese-built car, but Nissan’s all-electric Leaf offers environmental credentials that top any nationalistic concerns.

“Illinois is laying the groundwork for electric vehicles and a more green economy, and our efforts are paying off,” Governor Pat Quinn said Thursday, as he thanked Nissan for bringing the Leaf to his state months earlier than originally planned.

“By investing in electric vehicle technology, both the state of Illinois and Nissan are making transportation in our state more efficient, sustainable and affordable.” 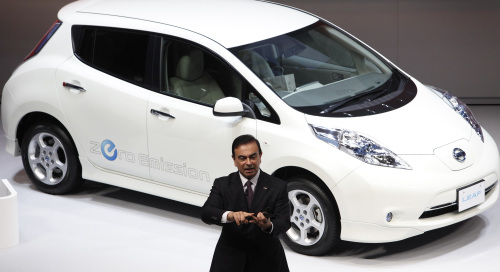 Nissan CEO Carlos Ghosn speaks in front of the company’s Leaf electric vehicle during a news conference at the company’s headquarters in Yokohama City, Kanagawa Prefecture, Japan. (Bloomberg)
The first mass-market electric vehicle has won some high-profile fans since it was launched in Japan and a handful of U.S. markets in December, and in Europe earlier this year.

The Leaf emits none of the tailpipe pollutants that have covered city skies in smog and is touted as a step forward from gas-electric hybrids produced by the likes of Toyota, which makes the best-selling Prius.

Eager early adopters are waiting months to get their hands on one and 350,000 Americans have asked Nissan to send them information about the Leaf.

Yet it’s not yet clear how successful the Leaf will be at winning over what Nissan’s U.S. marketing director calls the “pragmatic majority.” Or what kind of an impact it will have ultimately have on greenhouse gas emissions.

Unlike plug-in hybrids like GM’s Volt which also offer zero-emission driving - though at a far more limited range - Leaf drivers can’t just stop at a gas station if they run low on battery power.

While most Americans drive just a fraction of the Leaf’s maximum range of 100 miles (160 kilometers) on their daily commutes, there simply aren’t yet enough public charging stations to allow for road trips or fully eliminate ‘range anxiety’ - the fear of getting stuck on the side of the road when the battery runs dry.

“It’s a big shift,” Leaf marketing director Brian Marangno told AFP after the Chicago launch, which will include a highly-publicized three day “Drive Electric” fair where prospective buyers can learn about the Leaf and take it for a spin outside the Field Museum.

“Our car is not for everyone, there’s no doubt of that, but it’s for a lot of people.”

JD Powers forecasts that 12,000 electric vehicles will be sold in the United States this year - a tiny fraction of the 12 to 13 million vehicle market.

That number should rise to 100,000 vehicles in the U.S. and 800,000 worldwide in 2016 as more automakers enter the electric market and more consumers are drawn to the product, said JD Powers auto industry analyst Mike Omotoso.

While those numbers look impressive, electric cars are forecast to make up just 0.6 percent of the US market and 1.3 percent of global auto sales by 2016.

More flexible hybrids are expected to take a bigger chunk as automakers expand their offerings to meet stringent fuel economy and emissions standards.

JD Powers forecasts hybrid sales will reach 1.1 million units in the United States and 3.1 million worldwide in 2016, which is around seven and five percent of the markets.

“One of the things that’s slowing down the growth of hybrids and electric vehicles is that we’re seeing a big improvement in fuel economy with gasoline-powered vehicles,” Omotoso said in a telephone interview.

“With the economy still weak, people are going to look for the cheap solution,” Omotoso said.

That’s why it’s so important for automakers to improve the fuel efficiency of their entire lineup, said Luke Tonachel, a transportation analyst with the National Resource Defense Council.

“Electric cars are one of a suite of technologies that are making vehicles cleaner and more fuel efficient,” he said.