DAEGU -- The world’s fastest man Usain Bolt vindicated himself by running the men’s 200 meters final with the second-fastest winning time in the history of the World Championship, despite calling his efforts “conservative.”

“I had to be conservative, I had to run a more technical race,” said Bolt, who found himself in lane three, more inside than the 25-year-old Jamaican is used to.

But that did not stop the defending champion from coming in with the third-fastest time ever recorded, at 19.4 seconds, well ahead of U.S.’s Walter Dix and France’s Christophe Lemaitre.

Something about Bolt looked different on Saturday, as the champion ran the entire race grimacing with determination, despite leaving last off the blocks.

“I ran as hard as possible,” said Bolt, but added that he was not in his best shape and his lane placing made the corner a bit tight for him. 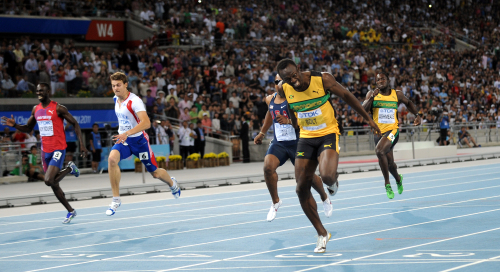 Usain Bolt crosses the finish line to win the 200m final on Saturday night. (Park Hae-mook/The Korea Herald)
And after the 100m debacle the Jamaican sprinter is taking the experience and learning from it, saying there will be no more “joking around.”

But it’s hard to tell with the theatrical athlete, who certainly gave the crowd in Daegu a show with a victory lap that will be hard to forget, playfully running from and chasing photographers on the track. The gifted sprinter was clearly happy with the fans in Daegu and gave them everything from a shoe on Friday to a shirtless dance routine that drove the crowd wild.

Before the 200m, the U.S. squad ran in for a season best 3:18.09 in the women’s 4x400m relay to take gold leaving Jamaica and Russia settling for silver and bronze.

In the 100m hurdle, Aussie Sally Pearson set a championship record of 12.28 seconds, with U.S.’s Danielle Carruthers and Dawn Harper fighting for silver and bronze, respectively.

Like the marathon, Kenya took more medals in the men’s 1,500m on Saturday, with Asbel Kiprop for gold and Silas Kiplagat for silver.

Anna Chicherova of Russia and Blanka Vlasic of Croatia took gold and silver in the women’s high jump, and Germany’s Matthias De Zordo stood on the podium in the javelin with Norway’s Andreas Thorkildsen in second.