At first glance, the atmosphere is a world apart from that of the stadium, with athletes looking relaxed and serene, rather than the tense and focused as on the blocks. 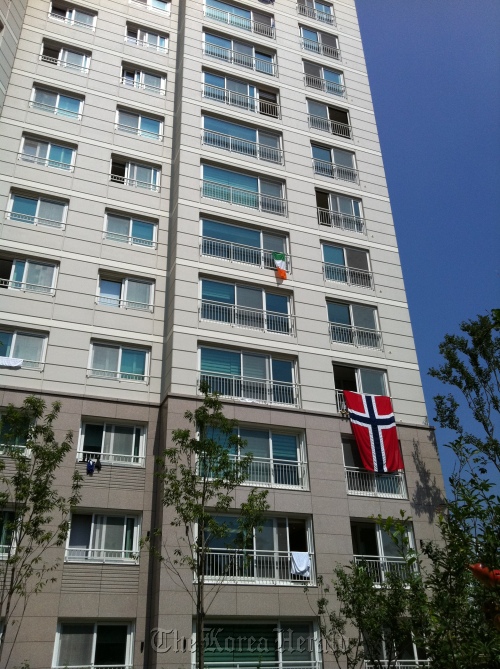 Within moments of entering the village the pride is apparent throughout with national flags strung outside of the windows and occasional sudden bursts of cheers.

Inside the village, athletes are easily seen strolling about or cruising on bikes provided within the village.

“Bikes are great since we are no longer limited to walking distances,” said a Team USA official, who declined to give his name.

The apartment facilities in the village recieved praise.

“Its beautiful and its nicer than anything I have ever seen before and from what I’ve heard from the athletes who have been around for a while, this is one of the nicest villages they have ever been to,” said a Canadian athlete.

The complex houses some 3,500 athletes and staff members. Daegu in the first city to provide an Athletes’ Village free of charge to all athletes.

And as the athletes don’t have time to venture far, the cultural events put on inside the village are a huge hit as well.

“I went to the cultural experience and that was really nice. You can tell a lot of work went into them and we appreciate that,” said one U.S. athlete whose praises about the food were not so high.

“It’s terrible,” said the female U.S. athlete, who declined to be named.

“I don’t even eat in the cafeteria anymore because I got sick twice,” she said.

“The first day I ate some chicken and it made me sick, and the second day I had a half a boiled egg and I threw up,” said the track athlete who now resorts to eating out or having her coach cook for her.

But the list of complaints do not stop there for the buffet style cafeteria meals reportedly worth around 50,000 won ($47) if bought at the Hotel Inter-Burgo, the catering company for the dining facility.

The Jamaican Team’s executive member had much to say on the topic, as all his athletes no longer eat in the cafeteria.

“The athletes are not eating the food in the villages. It’s bad, it’s terrible. The food is no good and it’s the same food everyday, day in and day out in the morning to the evening,” said Gregory Hamilton of the Jamaican team.

According to Hamilton, the Jamaican team resorted to seeking permission to cook in the apartments and hiring a personal chef familiar with Jamaican food.

“We are getting food from the supermarket like the one minute rice in the packets that you cook in the microwaves,” Hamilton told The Korea Herald.

According to Lee Jung-no, in charge of the catering service, the food is overseen by six members of the Korea Food & Drug Administration and other organizations for food safety.

He also added that nutritionists and professors are out on the scene to constantly check the nutrition value of the food.

“We are doing our absolute best as we understand our services not only hold Daegu’s reputation but Korea’s as well,” Lee told The Korea Herald.