They were joined in the last 32 by women’s top seed Caroline Wozniacki and fourth seeded Belarusian Victoria Azarenka who next tackles a rampant Williams who has lost just three games in two matches so far.

The third seed next faces Croatian 27th seed Marin Cilic who put out 18-year-old Australian Bernard Tomic, the youngest player in the draw, for the loss of just three games. 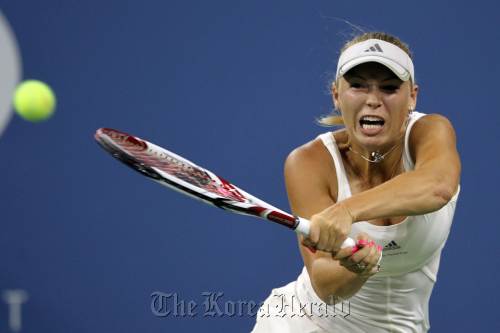 Caroline Wozniacki returns a shot against Arantxa Rus during the 2011 U.S. Open at the USTA Billie Jean King National Tennis Center on Thursday. (AFP-Yonhap News)
“Not much trouble on my serve, and from the baseline I also thought I had the upper hand. When it’s like that, obviously it’s tough for the opponent, but I just think I was superior today,” said Federer.

“It was a good match for me in breezy conditions It was a bit tricky early on to find the rhythm. That’s why I was happy to get the first break in the first set.”

Williams boasts a 5-1 career record over Azarenka, including all four of their Grand Slam meetings.

The American, who is seeded 28 after spending most of the last year fighting injury as well as life-threatening blood clots on her lungs, saw off Krajicek with a 10th ace, having unleashed 25 winners to the hapless Dutch girl’s five.

The American insisted that she had not been distracted by seeing sister Venus withdraw from the tournament 24 hours earlier after being diagnosed with an auto-immune disorder.

“It really wasn’t that difficult, to be honest. She wants me to do the best; she wouldn’t want me to suffer. So now, if anything, it should motivate me more,” said Williams.

Top-seeded Wozniacki brushed aside Dutchwoman Arantxa Rus 6-2, 6-0 and next tackles Vania King of the United States.