The director told reporters ahead of a star-studded opening of the world’s oldest film festival that the work was ready to begin filming in 2008 when Barack Obama won the U.S. presidential elections, but he was initially worried the climate of optimism was not right for his cynical tale.

“Everyone was in such a good mood! It only took about a year for that to all change,” he said. “At the moment, cynicism seems to be winning over idealism.”

Clooney, who plays a presidential candidate in the film, denied any political ambitions of his own ― or aspirations to stand for president.

“There’s a guy in the office right now who is smarter and more compassionate than anyone I know,” he said of U.S. President Barack Obama, adding with a laugh: “Hollywood’s still a playground ... and I get to hang around with seductive people.” 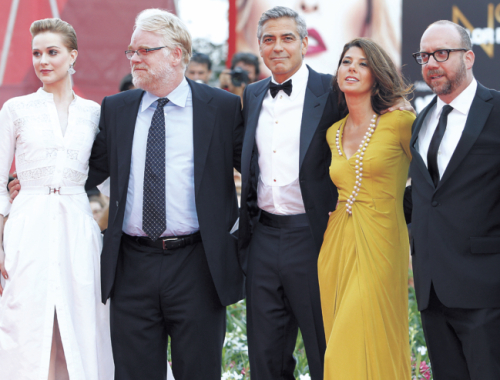 Clooney was visiting Venice with former supermodel Cindy Crawford and her husband.

His fourth film as a director opens the competition ― which will see 22 world premieres compete for the prestigious Golden Lion award ― before the stars head to an exclusive party on the beach.

The thriller is about a U.S. presidential campaign in which a loyal aide helping the Democratic governor win a primary in Ohio discovers just how dirty politics can be and it was met with general acclaim by critics.

Based on Beau Willimon’s play, “Farragut North,” the film’s screenplay, written by Clooney along with Grant Heslov and Willimon, showcases the director’s reputation for astute political commentary with a dramatic twist.

The play, inspired by Willimon’s experiences working on the presidential campaign trail in Iowa in 2004, was the “morality play” Clooney had been looking for, he told journalists.

The title, “The Ides of March,” was chosen for its Shakespearean connotations and at the heart of the thriller, he said, lies the question: