Financial authorities said household debt between Aug. 1-26 already reached 4.9 trillion won. Given that demand picks up toward the end of the month, the final tally is expected to easily surpass the 5 trillion won mark.

The rapid expansion of household debt in August has alarmed financial regulators as the nation’s economy is struggling to fight a slower-than-expected growth and external factors such as the debt woes in Europe pose a continued threat for Asia’s fourth-largest economy.

“The monthly debt could surpass 5 trillion won, or even reach 6 trillion won, as the last couple of days of a month usually see heavy volume of individual credit transactions at the banks,” said a Financial Supervisory Service official.

The pickup in household debt in August is now expected to increase the July-August total to near 10 trillion won. In June, the government announced a set of measures to reduce household loans in June, tightening banks’ loan-to-deposit ratios and mending banks’ lending practices. But the latest figures suggest that such efforts are not translating into an intended drop in household loans. 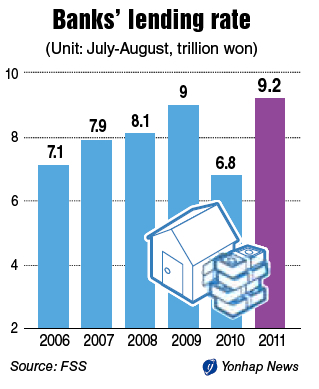 The rise in household loans is fueled by mortgage-related loans and overdraft. Home lease, or “jeonse,” prices continue to rise despite the protracted slump in the housing market, while individuals are seeking to get loans via overdraft, a channel that is under less regulatory supervision.

The financial regulators are now considering additional measures to limit loan extension after observing the trend in the coming weeks, especially ahead of the Chuseok holiday in September.