“The Client,” which is anticipated to be released in late September, aims to combine both drama and suspense with its character-driven narrative surrounding a murder trial where the dead body is missing.

“This is a courtroom thriller and the twist had to be there,” director Sohn Young-seong told reporters during a press meeting in Seoul, Tuesday. “It’s all about whether the suspect is guilty or not guilty. But I thought what’s important is the legal process toward that conclusion, and I put a lot of effort in making that process entertaining (on top of the twist in the ending.)” 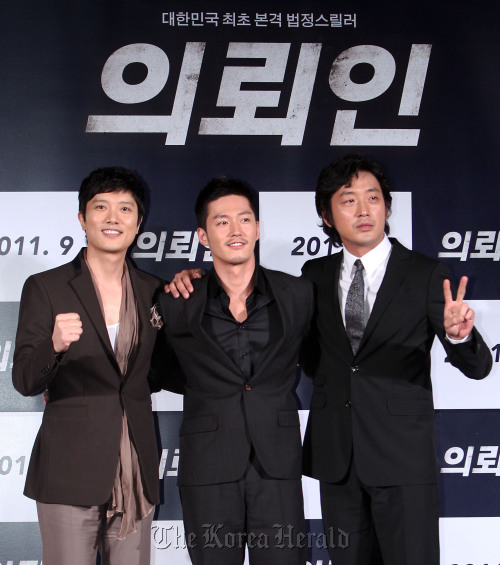 From left: Actor Park Hee-soon, Jang Hyuk and Ha Jung-woo pose for a photo during a press conference promoting their upcoming courtroom thriller, “The Client,” in Seoul, Tuesday. (Yonhap News)
Jang Hyuk, who brought an impressive performance as a Joseon slave hunter in 2010 KBS action historical drama series “Chuno,” plays Han Cheol-min, the only suspect of the case who is accused of killing his wife. The reserved and quiet character brings both ambiguity and mystery, as he would not actively deny his charges during the trial.

“The whole movie relied on whether my character in fact killed his wife of not,” Jang told reporters. “So I had to display both good and evil qualities throughout the film.”

Jang said though the suspect Han may not be attractive as a male character, he found him interesting and challenging enough to give a try.

“For my past works I’ve played a lot of active characters,” he said. “But this one is rather passive and quiet. I ended up delivering his feelings more by trying to be less expressive.”

Representing the suspect, Jang, is Ha Jung-woo, the two-time Paeksang Arts Awards winner with his 2010 action crime thriller “The Yellow Sea,” and 2009 ski jumping drama “Take Off.” He plays Kang Seong-hee, an attorney who is convinced that his client Han is not guilty.

Ha said working on this film was very much like participating in theatrical plays back in his early 20s. “I calculated every line and move before we went on a shoot as if performing for a play,” Ha told reporters. “I didn’t allow myself to act spontaneously. I thought the written script and how I deliver it clearly was very important for this movie, as it is about a court trial.”

Park Hee-soon, whose previous works include “The Showdown” (2010) and “Seven Days” (2007) plays the prosecutor who goes through a series of intense legal clashes against the accused Jang Hyuk and his lawyer Ha Jung-woo.

Park, along with Sohn, watched many courtroom drama classics including 1957 American film “Witness for the Prosecution” prior to working on the film. “I usually avoid watching related films before working on a movie because I’m afraid that I might unintentionally imitate someone else’s acting style,” he said. “But I watched both documentaries and classics along with books for this movie as the genre is relatively new in Korea.”

Actress Yoo Da-in, who starred as a young woman searching for her thought-to-be adopted daughter in 2010 film “Re-encounter (Hyehwa-dong),” performs the role of Jang’s murdered wife, whose mysterious life story is unveiled throughout the movie.

The three actors and the director kept complimenting each other throughout the press meeting, while showcasing their sense of humor.

“How can I not favor Jang Hyuk?” director Sohn joked when asked about his previous remark on Jang’s “superb” looks. “I am personally not happy with my own appearance, so I get kind of nervous when I see actors who are so good-looking like Jang.”

In response to Sohn’s comment, Jang jokingly replied. “You’ve been telling me I’m good at acting!“