The ESO, led by conductor and music director Gernot Schumalfuss, is to hold a concert on Sept. 4 at the Seoul Arts Center’s Concert Hall and another on Sept. 5 at the Busan Citizen Hall, the concert organizer said. 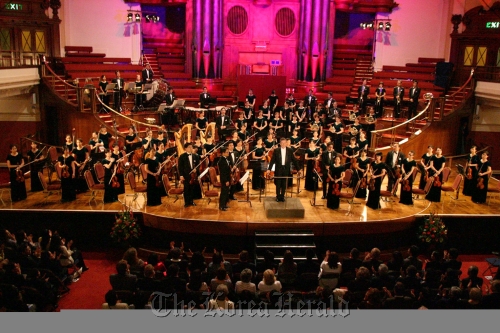 Then, the ESO will play Korean folk song “Arirang,” arranged by Masaaki Hayakawa, followed by American folk song “Dreaming of Home and Mother.”

It will be a good chance to see how the ESO will interpret Malay folk song “Rasa Sayang” and the famous Indonesian folk song about the Solo River, “Bengawan Solo” in orchestral sounds.

Another highlight of the concert will be Chen Gang and He Zhan-Hao’s Violin Concerto “The Butterfly Lovers” performed by violinist Lu Siqing, the first Asian violinist to win the first prize at the Paganini Competition in 1987.

The second part of the program will be Dvorak Symphony No. 9, “From the New World.”

Founded in 2001 by Taiwan-based conglomerate Evergreen Group, the ESO staged its first regular concert in October 2002 and has had several overseas tours including those in Singapore, Japan, the U.K., the U.S. and China.

Revenues generated by the recorded video and audio of the ESO concerts are used for charity and scholarships, the organizer said.