ROME (AP) ― Filmmaker Sofia Coppola went back to her roots for her wedding, marrying rocker Thomas Mars in the remote, southern Italian town where her great-grandfather was born.

Coppola’s famous filmmaker father, Francis Ford Coppola, escorted the 40-year-old Sofia down the aisle Saturday to a waiting Mars, lead singer of the French band Phoenix and the father of their two young daughters. 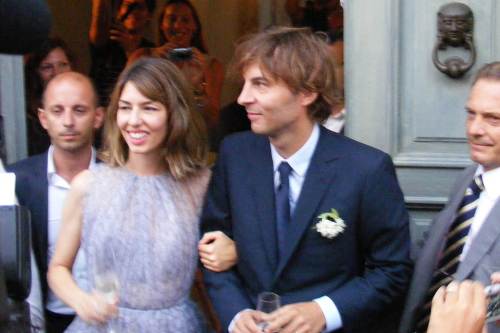 Sofia Coppola and Thomas Mars leave after their wedding ceremony in Bernalda on Saturday. (AFP-Yonhap News)
The early evening ceremony took place in the garden of the palazzo that the elder Coppola renovated in the historic center of Bernalda, a city near the Gulf of Taranto in Italy’s Basilicata region, according to Mayor Leonardo Chiruzzi who performed the ceremony.

“Everything went well,” Chiruzzi told The Associated Press afterwards. “It was simple, calm, in the garden.”

The bride wore a sheer, lavender tulle dress and Mars a gray suit with a flower in the lapel. The bride and her father were preceded down the aisle by the couple’s older daughter and other children. After Coppola and Mars said their “si” in the civil service, she tossed her bouquet and a friend caught it, Chiruzzi said.

The newlyweds and the father of the bride, wearing a white linen suit and pink shirt, then popped out of the palazzo briefly to greet onlookers. She was holding a glass of bubbly.

Bernalda, near the UNESCO-recognized troglodyte settlement of Matera to the north, was home to Francis Ford Coppola’s grandfather, Agostino, before he emigrated to the United States at the turn of the last century.

Chiruzzi said the wedding was simple by design.

“If they wanted to do a Hollywood wedding, they wouldn’t have done it here,” Chiruzzi said by phone on the eve of the nuptials. “(They) chose to do it here because it’s here ― it’s here that is beautiful.”

He stressed the low-key nature of the event. The ANSA news agency said guests included Johnny Depp and Talia Shire, the bride’s aunt, who is best known for her roles in her brother’s “The Godfather” films and as Sylvester Stallone’s girlfriend Adrian in “Rocky.”

A dinner was planned to be followed by cake, made to serve about 100 people. It was a simple vanilla cake with Chantilly cream, decorated with white flowers and prepared by the chef at the Magna Grecia hotel in Bernalda, said Biagio Loiudice, who runs the hotel.

“They came in last week and chose the cake,” he said by telephone. “It’s not high, very simple. They preferred simplicity.”

Sofia Coppola’s 2003 film “Lost in Translation” won the filmmaker an Academy Award for original screenplay and made her the third woman ever nominated for a directing Oscar. Her 2010 film “Somewhere,” about an actor who sees the emptiness of his existence through the eyes of his child, won the top Golden Lion prize at the Venice film festival last year.

The elder Coppola has become something of a spokesman for Basilicata, a mostly poor region located on the “arch” of boot-shaped Italy. In a promotional video for the area, he reminisced about his grandfather’s tales about Bernalda and extolled Basilicata’s unspoiled -and largely unknown ― beauty and culture.

He is planning on turning the Bernalda palazzo where the wedding took place, “Palazzo Margherita,” into a luxury boutique hotel.

Nearby Matera is on UNESCO’s world heritage list, prized as an example of a traditional human settlement that dates from Palaeolithic times. The famous sassi, caves dug into the soft tufa rock that gives Matera the look of ancient Jerusalem, were used as primitive, one-room homes and remain a tourist draw today.

Some have been renovated and turned into trendy hotels, but the area remains so ancient-looking that Mel Gibson shot much of “The Passion of the Christ” there.