After years of planning, anticipation and preparation South Korea’s first global athletics competition finally kicked off on Saturday with an opening ceremony.

The ceremony dazzled the more than 65,000 spectators turned out at the Daegu Stadium to celebrate the biggest track and field event, which runs until Sep. 4. 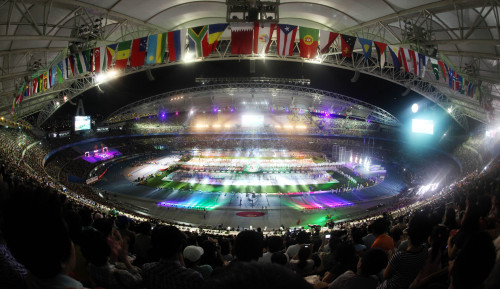 More than 700 performers put on a show more in line with Olympic opening ceremonies than a world championship, affirming Korea’s dedication to sporting events to the international community.

True to Korea’s role as an IT powerhouse, the ceremony utilized QR, or Quick Response, codes to bring up a program helping spectators enjoy the performance to the fullest.

Different performances surrounded culturally significant objects, such as a bojagi, or Korean wrapping cloth synonymous with ceremonies, and daedumi, a stick used to iron clothing and meant as a sign of support for the athletes.

Diack expressed gratitude to Seoul, the Local Organizing Committee and Daegu Metropolitan City for their efforts in preparation.

“I am confident that the IAAF World Championships Daegu 2011 will serve as a present from our hearts to all our neighbors in the global community,” said Lee, declaring the opening of the nine-day extravaganza.

South Korean marathon legend Sohn Kee-chung was also honored during the event. Sohn was a gold medalist in the 1936 Berlin Olympics, but was forced to run under the Japanese flag during the country’s occupation.

Earlier in the day, with the anticipation and excitement already building around the stadium, Kenyan athlete Edna Kiplagat claimed the first gold medal in the women’s marathon. Despite a fall at the drink station, the 31-year-old crossed the line ahead of her fellow countrywomen Priscah Jeptoo and Sharon Cherop in a time of 2 hours, 28 minutes and 43 seconds.

South Korean sprinter Jung Hye-lim received the biggest applause of the day advancing into the first round of the women’s 100-meters with the third fastest time in the preliminary round in a time of 11.90.

But later in the day, Kim Kuk-young, who holds the national record of 10.23 seconds, had the disappointment of being disqualified in the first heat of the men’s 100m preliminary round for a false start.