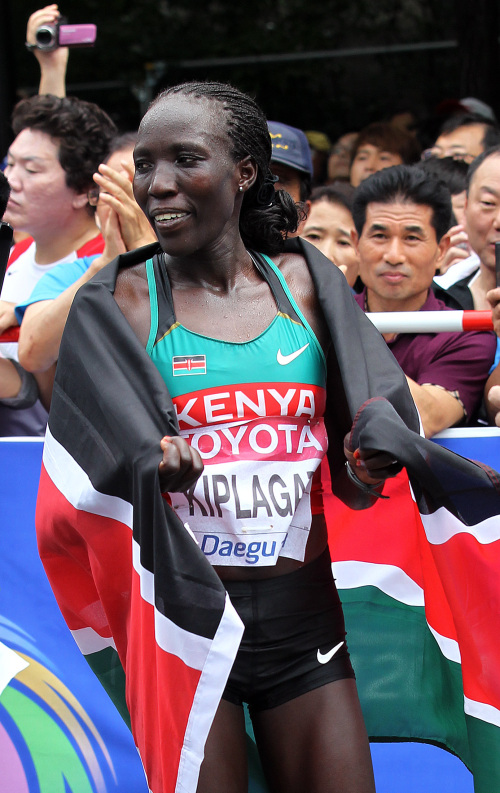 Kenya is the first country to sweep marathon medals, men's or women's, at the world championships.

After runners from Kenya, Ethiopia and Japan jostled for positions halfway through, Kiplagat, Jeptoo, Cherop and Ethiopia's Aberu Kebede opened up some distance at the 35㎞ mark. But Kebede soon fell behind, allowing the three Kenyans to sweep the medals on the relatively flat loop course cutting through downtown Daegu. The

Kiplagat, 31, came in with the year's fastest time in the field. Kenya's Mary Keitany and Russia's Liliya Shobukhova, owners of the season's two best times, did not compete here.

"I am very happy because I didn't know I was going to win," Kiplagat said. This was only her fourth marathon. "I thought if I run the way I did my last two, three marathons, I would have a chance."

She was in the middle of the pack at the 20㎞ point, and later said it was "part of my strategy to try to run my second lap faster."

The temperature at the start was 24 degrees Celsius, or 75 degrees Fahrenheit, much cooler than usual in this southeastern city known for its sweltering summers. The temperature rose slightly to 26.5 degrees and the air became more humid toward the end of the race, as early overcast skies gave way to some sunshine.

Kiplagat said she still wasn't used to running in warm conditions and added she expected the weather to be even warmer.

Kiplagat survived a scare at the second-to-last drinking station near the 40㎞ turn, tripping over Cherop while trying to pick up her water bottle. Cherop briefly stopped to help up Kiplagat, who promptly reclaimed the lead.

Kiplagat later said it was merely an accident.

"When I fell, I just tried to get up and pick up myself," she said. "I tried to pick up my water and she (Cherop) didn't see me. I tried to run my best (afterward)."

Cherop admitted she was "annoyed because it was not my fault," but she decided to wait for her friend and teammate.

Jeptoo said all three Kenyans regrouped after about 1㎞ from the near-disaster.

"We go together, and all of us are very happy now," Jeptoo said.