Though the dry-aged steak trend swept through Seoul a year ago, the fervor for grilled slabs of beef has yet to fizzle.

Two new establishments specializing in steak opened this year, a sure sign that there is always room for more meat.

What is interesting is that both places ― Charcoalo and Butcher’s Cut ― set up shop in an area already saturated with steakhouses.

Affluent Cheongdam-dong and Sinsa-dong are famed for harboring some of the city’s best dry-aged steak.

So, how are these new kids on the block planning to attract diners?

Charcoalo manager Kevin Hong, 35, agreed that the market is already up to its ears in dry-aged beef, which is why the new joint opted for some good, old-fashioned American-style barbecue instead.

SG Dinehill-run Butcher’s Cut, which opened its first store in Hannam-dong earlier this year, is sticking to aged beef, but, according to marketing team general manager Sung Sang-hee, 33, their restaurant goes easy on the wallet.

“Meat in Seoul is on the expensive side and dry-aged steakhouses tend to be on the pricey side,” said SG Dinehill’s Sung. “Butcher’s Cut wanted to dole out tasty grub at friendly prices.”

In short, Butcher’s Cut is looking to nab the lower-priced market. Charcoalo is taking a grill-heavy tack and forgoing aging altogether.

What is even better, though, is that both places live up to their promises. Butcher’s Cut definitely gives more bang for the buck, and Charcoalo brings the barbecue to town.

Charcoalo keeps it casual, serving up American-style barbecue in a red-and-wood space that has a distinctly cabin-like vibe. (Kim Myung-sub/The Korea Herald)
Charcoalo

Grilling meat over coals, rendering it juicy, smoky and busting with flavor, is one of the most iconic ways to cook up a steak.

Charcoalo, which opened in Sinsa-dong this July, understands the beauty of barbecue.

“We don’t use anything other than charcoal,” said manager Hong.

The beef is not aged at all. The focus, says Hong, is on grilling “good beef.”

Hong and team do an excellent job at rendering even the most fickle of cuts, like thin flank, utterly succulent and tender.

Classic striploin is barbecued thin, about a centimeter thick, and long, so that you get maximum flame per inch for a sizzling, juicy steak.

Mexican thin flank steak is the only marinated cut on the menu. While thin flank boasts great beefiness, it tends to be more tough than soft. By letting the beef soak up a chipotle-based marinade for three days, the crew at Charcoalo nabs both flavor and texture in one fell swoop.

It can be had as a burger, but is probably just as good or even better ordered up by itself.

The vibe is distinctly casual, and the steaks are generally served medium because that, according to Charcoalo’s grilling philosophy, is when it tastes best. 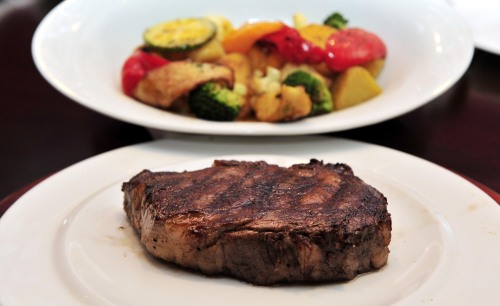 Butcher’s Cut’s 300 gram USDA Prime rib eye is grilled over charcoal and wood chips after having been wet-aged for about two weeks and then dry-aged for about 10 days. Vegetables sauteed in garlic butter and spiced up with peperoncini make for a pleasant side dish. (Kim Myung-sub/The Korea Herald)
Butcher’s Cut

After opening its first outlet in Hannam-dong, restaurant-and-dining company SG Dinehill opened a second Butcher’s Cut in Cheongdam-dong this month.

For 42,000 won, customers can enjoy a full-course meal complete with amuse bouches, bread, an appetizer, steak and dessert and coffee.

Warm cornbread, which edges towards baked polenta in terms of texture, is served up at the beginning of the meal and makes for a delightful way to start off the lunch special.

A trio of amuse bouches ― a foamy mushroom and cream soup, a micro Caesar salad and a bit of prosciutto and melon ― prove equally good. An Italian-style salad of bocconcini cheese and cherry tomatoes is followed up by the steak.

Patrons can pick from a wide array of main dishes for the weekday lunch course, including filet mignon or New York strip. Rib eye is also available.

It is the aging, of course, that breaks down the muscle’s connective tissue, giving you softer beef, which is why it works great with cuts like rib eye. Rib eye possesses all the bold flavors of meat, but without any aging, may across a bit tougher than, say, a buttery filet mignon.

Butcher’s Cut does a pretty good job at aging and grilling. The rib eye was flavorful, though somewhat rough in texture in some areas and then tender and succulent in others. Some might find the cut a bit salty, but otherwise deem it more-than-worthy of its reasonable price tag, especially because it not only kicks off with some great bread and appetizers, but also because it ends with some dessert and coffee.