DAEGU ― Sport fans from around the world are looking to Daegu, as the best athletes on the planet are now in the Korean city for the 13th IAAF World Championships in Athletics, the biggest sporting event in 2011.

Starting on Saturday, a record number of 1,945 athletes from 202 countries will compete in 47 events, from marathon and hurdles, to long jump and javelin during the nine-day contest. 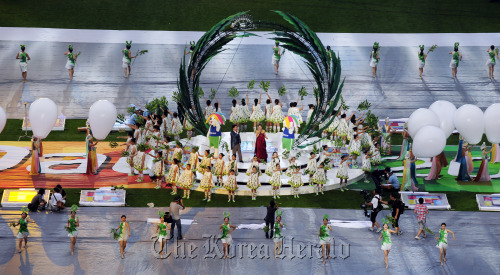 Performers rehearse the opening ceremony for the 2011 International Association of Athletics Federations World Championships in Daegu. (Park Hae-mook/The Korea Herald)
Korea is hosting, for the first time, the world’s biggest track and field event at the Daegu Stadium, which was also used for the 2002 FIFA World Cup.

To make it more compact and exciting, the International Association of Athletics Federations has slimmed down the competition schedule, cutting down the number of preliminary races.

Reigning 100-meter world champion Usain Bolt of Jamaica, for instance, will need only six races to defend his title in Daegu, instead of the eight races in previous competitions. Also, most qualifying rounds will be held during morning sessions and finals will be in the evening programs between 7 p.m.-10 p.m.

The World Athletics Championships kicks off Saturday 9 a.m., and the first event, as is tradition, is the marathon, this time for women.

Kenya’s Edna Kiplagat, whose season-best record of 2 hours 20 minutes 46 seconds makes her the fastest entrant in Daegu, is hoping to win the first gold medal at the Daegu Worlds. But she is expecting strong challenges from Yoshimo Ozaki of Japan, who came second in Berlin two years ago, and also Asian Games champion Zhou Chunxiu.

Inside the stadium, the world’s fastest man Usain Bolt is settling into the starting block on Saturday as the men’s 100-meter preliminary round begins on the opening day of the competition.

His toughest challengers, world No.2 Tyson Gay and No.3 Asafa Powell, are both out of the competition, and the 100 final on Sunday is likely to be an easy win for Bolt.

Kenenisa Bekele of Ethiopia is a living legend in long-distance running. The reigning Olympic champion, who holds world record in both the 5,000 and 10,000, is in the hunt for his fifth world title in 10,000 in Daegu.

If the 29-year-old wins the 25-lap race on Sunday, he will be the first runner in any distance to win five consecutive world titles.

Other events on the first weekend of the competition include men’s 20 km race walk, women’s long-jump and also women’s discus.

Two years ago in Berlin all Korean participants were knocked out in the preliminary rounds. This year Korea, with a 60-strong team for the home event, has set a relatively modest goal of finishing in the top 10 in 10 events here,

But Moon Bong-gi, head coach of the Korean athletics team is hoping to claim the country’s first-ever medal at the Worlds. He said earlier that Kim Hyun-sub, who set a national record of 1 hour 19 minutes 31 seconds in March, the seventh fastest time this season, has a real chance to win a medal in men’s 20-kilomter race walk on Sunday.