World number one Kim retained his under-81kg crown as he beat rank outsider Srdjan Mrvaljevic of Montenegro in the final. 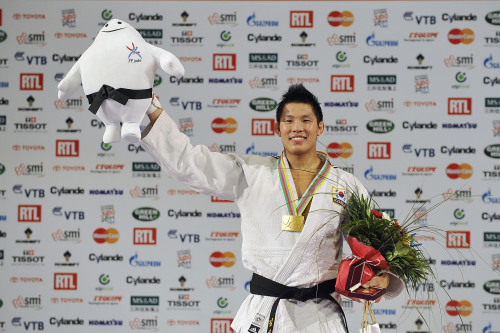 category at the Judo World Championships in Paris, France on Thursday. (Xinhua-Yonhap News)
Emane claimed a second title in a second weight category as she added under-63kg honors to the under-70kg gold she won in Rio de Janeiro in 2007.

Kim didn’t always have things his own way but by the end had proved he will be the man to beat at the Olympic Games in London next year.

His first major test came in the last 16 when he faced Olympic champion Ole Bischof of Germany.

But the Korean’s gripping was too strong and using his deft footwork he was quicker to the attack, forcing a number of passivity penalties against Bischof, who could find no answer.

Kim threw Russia’s Ivan Nofontov with a foot sweep (kouchi-gari) for a half point waza-ari score to reach the last four where he faced exciting French junior world champion Loic Petrie, who had enthralled the home fans all day with his relentless attacking.

Petrie had given warning of his potential in the third round when he sneaked past former world champion Guillaume Elmont of the Netherlands.

But in the semis Kim proved just a little too good and scored a decisive waza-ari with an inner leg throw (uchi-mata).

On the other side of the draw world number two Leandro Guilheiro of Brazil was in subdued and unspectacular form but ominously reached the semi-finals anyway.